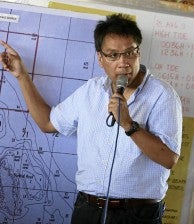 MANILA, Philippines – Although his name was not in the agenda for deliberations of the Commission on Appointments, incoming Interior Secretary Manuel “Mar” Roxas II was nearly confirmed by the commission Wednesday.
CA majority leader Nueva Ecija Representative Rodolfo Antonino said that he has urged the panel to forgo their rules and confirm Roxas immediately even though he was absent. He said that the required publication of Roxas’ nomination seven days before their hearing had already been done through extensive media coverage.
“Publication was effectively done with media coverage of his appointment the precedent was Sonia Brady as Ambassador to China which we waived publication because of the extensive media coverage of her nomination,” he told INQUIRER.net.

Antonino’s suggestion was apparently prompted by CA member Sen. Panfilo Lacson’s observation that the position left by the late Secretary Jesse Robredo “is very important” and that someone needs to be “put in the saddle right away” because of the “fast rising” crime rate.

But other members of the CA prevailed, warning Antonino that doing away with the period that allows oppositors’ to Roxas’ appointment to lodge a formal objection would be unconstitutional.

Paranaque Representative Roilo Golez, another member of the CA, said that Roxas’ confirmation was in fact not part of their agenda. Antonino said that they decided to deliberate on the confirmation of the incoming chief of the Department of the Interior and Local Government on September 19, after Senator Joker Arroyo and Senate President Juan Ponce Enrile objected and said that the CA rules cannot just be bypassed.

Executive Secretary Paquito Ochoa Jr. told lawmakers on Tuesday that they transmitted to the CA Roxas’ nomination Monday. With a report from Cathy Yamsuan