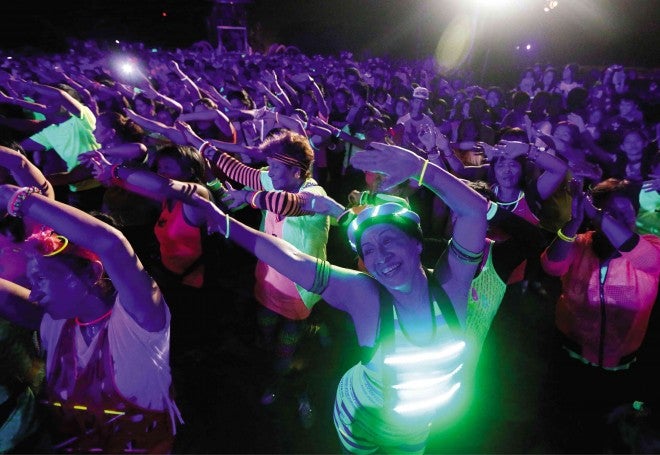 SHINING THROUGH Women wearing outfits that glow in the dark perform Zumba during Earth Hour on Saturday night at the Quezon Memorial Circle. The event is a global call to turn off lights for 60 minutes to raise awareness of the dangers of climatic change. INQSnap this page (not just the logo) to view more photos. MARIANNE BERMUDEZ

CEBU CITY—Bicycles took over the city streets of Cebu and Iloilo on Saturday night as major malls, business establishments, shipyards, resorts and households turned off their lights for an hour for the observance of Earth Hour.

The bike run, which started and ended at Cebu IT Park in Barangay Lahug, was organized by Tindak Sugbo, an umbrella organization of different bikers’ groups that have been promoting biking and bike lanes in Cebu.

The bikers were among the millions who took part around the world in the annual event organized by conservation group World Wide Fund for Nature (WWF), with hundreds of well-known sights including the Eiffel Tower in Paris and the Seattle Space Needle plunging into darkness.

Earth Hour took place from 8:30 p.m. local time and encouraged citizens, communities, businesses and organizations to switch the lights off for an hour to highlight the plight of the planet. The initiative began in Sydney in 2007 but quickly went global.

Earth Hour’s goal is not to achieve measurable electricity savings, but to raise awareness of the need for sustainable energy use, and this year also to demand action to halt planet-harming climate change.

In Pasig City, Eden Baysic and her youngest sister Baby have been joining Earth Hour in the last four years. They switched off all nonessential lights in their house for an hour.

Joining the two were Baby’s two sons Ethan and Miggy, and Eden’s friend Cris and her niece 10-year-old Alexine. Eden said that it was the first time Alexine joined their little initiative for the environment.

“We just tell them that what we’re doing now is important for their future so that there would still be energy left for their generation,” said Eden, who works as a production director for a publishing firm in Makati City.

“Since, right now they may not understand if we tell them the threats of climate change or how the switching off of lights is a symbolic statement of our contribution to [reverse the harmful effects] of climate change.”

Like Eden, Phillip Medalla is a fourth-year Earth Hour participant.

“[T]he great thing about the advocacy is the fact that it is a living example of the little ways that can be magnified when done with a lot of people,” said Medalla, a financial analyst.

At Quezon City Memorial Circle, a glow-in-the-dark Zumba dance party was held during the hourlong switch-off.

“We wish to thank everyone who supported Earth Hour. Now the real work begins as we work to reduce our individual carbon footprint, our impact on the Earth,” said Earth Hour Philippines national director Gia Ibay.

“The small things we do in conservation efforts, be it electricity or water, are big things for our Mother Earth,” said Councilor Benedict Jasper Lagman, who authored the no-plastic ordinance in San Fernando.

Proceeds from the activities were donated to the Wildlife in Need Foundation, a nonprofit organization in the free port that serves as a shelter for rescued animals, according to organizers.

The Isabela provincial capitol and shopping malls in the cities of Ilagan, Cauayan and Santiago turned off about 80 percent of their night lights.

The National Grid Corp. of the Philippines recorded a maximum load drop of 34.67 megawatts for the Visayas grid from 8:30 p.m. to about 8:50 p.m.

Apparently, more establishments and households participated in Cebu this year than in 2014. These included the two malls of SM City as well as two flagship projects of Ayala-owned Cebu Holdings Inc. (CHI)—Cebu Business Park and Cebu IT Park.

In a statement, CHI said the one-hour switch-off resulted in savings of 6,680.4 kilowatts (kWh) in Ayala Center Cebu alone, equivalent to 3,660.9 kilograms of carbon dioxide (CO2) that were prevented from being emitted into the atmosphere. CO2 is a greenhouse gas that is one of the causes of global warming as it traps heat in the atmosphere.

Lights in the common areas inside Cebu Business Park and Cebu IT Park, as well as CHI’s managed properties, were switched off for an hour, resulting in savings of 7,608.14 kWh equivalent to 4,169.26 kg of CO2.

Signages, hallways, perimeter lights and half of the hallway of both SM City Cebu in Cebu City and SM City Consolacion in Consolacion town were switched off for an hour.