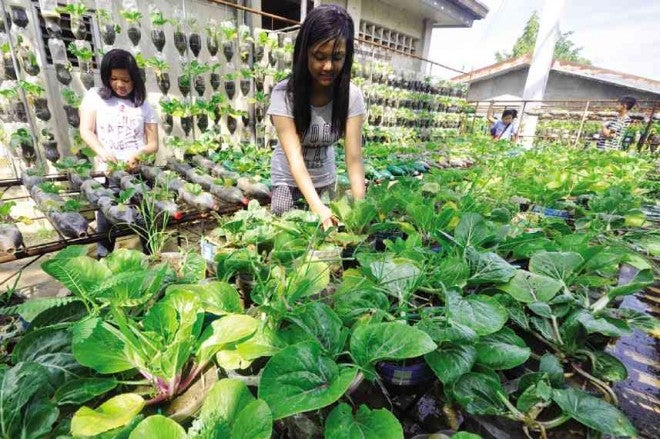 DAGUPAN CITY—The backyard of the Bonuan Boquig Elementary School here is a cornucopia of vegetables grown in discarded oil cans and plastic soda bottles, which are stacked neatly in rows or hang vertically from chicken wire fences.

One of the fences is lined with pechay sprouting out of discarded rubber boots filled with soil.

The school’s main pathway leads to a vertical garden tower of recycled containers planted with tomatoes, eggplants and okra.

This poor man’s hydroponic and aquaponic garden, which is tended with the help of Grade V and VI pupils, exposes visitors to ways of growing food in areas without big farmlands.

The garden was built two years ago by school principal Manuel Ferrer, and was the school’s winning entry to the “Gulayan sa Paaralan” competition in this city.

In November 2013, Ferrer embarked on a project to turn the empty spaces of the school yard into a vegetable garden.

“I did this at the school where I was assigned before, and I wanted to show the students that it is possible to grow their own vegetables,” he said.

Ferrer was the principal for three and half years at Carael Elementary School here. That school’s garden also won the top prize of the Gulayan sa Paaralan contest for two successive years.

To city residents, the garden is a relaxing deviation.

As soon as they see the tower garden set up in the 3-meter yard separating two school buildings, visitors immediately encounter 10 evenly spaced plastic drums, each pierced with neatly arranged holes from where romaine lettuce plants protrude for a taste of sun and air, and for easy harvesting.

At the top of the drums sit marigold shrubs, which are natural insect repellents.

“[In this section of the garden], we plant and at the same time produce vermicast, an organic fertilizer expelled by African night crawlers, a kind of earthworm,” said Ferrer.

Visitors then follow a 30-meter stretch of trellises made of plastic rope, where string beans climb and provide shade.

They can also wander around the school washroom, where hundreds of large soda bottles—cut lengthwise in half and filled with soil—hang on the walls and fence.

“This is our urban container garden rotunda. Hanging on the fence are the children’s individual projects planted with pechay, eggplants and pepper. We harvest every 20 to 25 days,” Ferrer said.

The school uses a shredder to cut up dried grass which is fed to vermicast worms.

Halfway into the garden tour is a 60-square-meter greenhouse, where vegetable seedlings are propagated. The greenhouse was the school’s prize for winning the regional competition.

From the greenhouse are long trails planted with pepper, eggplants and winged beans.

Then there is a roofed area where the school’s aquaponics system is located.

“This is basically a soil-less garden. Aquaponics is the process of raising both plants and fish in a single setting,” said Ferrer.

The school put up two fish tanks, one for growing tilapia fingerlings and the other for raising mature tilapia.

A solar panel powers a motorized pump that discharges water into the system.

“It has an automatic siphoning system, which floods and then drains the gravel bed on which we grow vegetables. The drained water goes to a container with Styrofoam rafts filled with lettuce plants. Then it is discharged into a tilapia pond before it is cycled back,” said Ferrer.

“This is soil-less technology. The organic materials produced by the fish serve as fertilizer for the plants,” he said.

The school garden was the fruit of community effort. “The parents, especially the members of the Pantawid Pamilyang Pilipino Program, were very cooperative and of great help to us in the land preparation,” he said.

He said they had to solicit from civic organizations for most of the materials needed to establish the ponds, the pathways and the vegetable plots. The Bureau of Fisheries and Aquatic Resources donated the red tilapia fingerlings cultured in the ponds.

Ferrer said they also intend to launch a home gardening contest among the school’s pupils to make them realize that they could grow their own food even if their yards are not big.

He said the vegetables they harvest are for the school’s supplemental feeding program.

“Some of the proceeds are used for the maintenance of the garden. We also have a pick-and-pay policy. Teachers and parents come and harvest vegetables. They pay for the produce they bring home,” he said.

The children take their vegetables home for free. They also have separate little garden patches.