CBCP: There is no need for divorce in PH | Inquirer News
Close
menu
search

CBCP: There is no need for divorce in PH 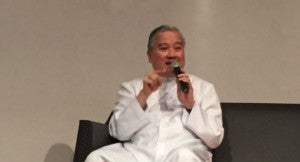 The Catholic Bishops Conference of the Philippines (CBCP) has reiterated its opposition to divorce, saying that other legal remedies are already provided by the law.

“Why then would one want divorce if legal separation, annulment and declarations of nullity are juridical options already available?” CBCP President Socrates Villegas said in an opinion article published on the CBCP website Friday.

READ: 3 out of 5 Filipinos want legalization of divorce – SWS survey

Villegas said “divorce allows an already married person to have another go at it, despite failing at the first.”

He cited that a failed marriage is not an argument for divorce but rather a proof of the necessity that only mature people enter into it.

“Marriage is and ought to be a work in progress. When the expedient of divorce is readily available, a couple will be less likely to work on differences, dialogue and reasonably work out solutions because there is a quick fix to incompatibilities,” he said.

The church official said divorce victimizes children, adding that separation of parents is already “traumatic” on the part of the children who must choose between their mother and father when it comes to their custodial rights.

Villegas likened divorce to test-driving a car and replacing it with a better one should it fail.

“It is plainly dehumanizing to both spouses to allow for a test-run, through a first marriage, and then grant the possibility of a replacement of spouses should the test fail,” he said.

“It is ironic that those most vocal in their support for divorce also hold themselves out as champions of human rights – and there can be no violation of human rights more egregious than to treat human persons the same way that you treat vehicles and appliances,” he added.

On Wednesday, Senator Pia Cayetano said that “the absence of a divorce law in the Philippines is nothing to be proud of.

READ: Lack of divorce law nothing to be proud of–Pia Cayetano

“We consider that a discriminatory practice because many women are forced to stay in a marriage that is harmful to them, either physically or emotionally,” Cayetano said.

But Villegas reacted to Cayetano’s statement, saying that divorce is neither “something for which we should be apologetic.”

The Philippines and Vatican City are the only two states in the world, which ban the practice of divorce.

Read Next
Cayetano: ‘If I do run, I will run for president’ but…
EDITORS' PICK
Pharmally owes P6.3B in taxes, senators told
Rise to perfection: Spot on tiles for your stair risers
Guanzon for Marcos DQ, sees ‘delay, interference’
COVID-19 cases in NCR, nearby provinces now going down — OCTA
Step up your vlog game with vivo’s newest smartphone
NUSTAR Resort and Casino: Cebu’s next lifestyle and leisure gem
MOST READ
Leni mansplained? Abunda ‘interruptions’ stir own buzz
6 areas to be placed under Alert Level 3 from Jan. 28 to Feb. 15
Rita Avila dismayed by Boy Abunda’s interview with Leni Robredo: ‘Parang ayaw mo pasagutin’
Gordon tells Duterte: I did not steal from Subic funds
Don't miss out on the latest news and information.