Cayetano: ‘If I do run, I will run for president’ but… | Inquirer News
Close
menu
search

Cayetano: ‘If I do run, I will run for president’ but… 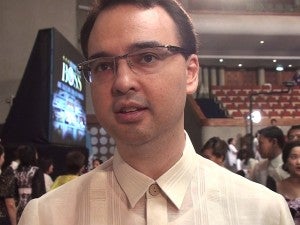 Senate Majority Leader Alan Peter Cayetano said he would decide either in June or July this year whether or not to pursue his presidential bid in 2016.

Cayetano was firm in seeking the presidency as he repeatedly rejected the idea of running for vice president.

“If I do run, I’ll run for president not because it’s not an honor, it’s not a step up, it’s not an extraordinary privilege to be vice president but because if you run for vice president, hindi mo mai-implement ‘yung (vision) mo e and I won’t be the type of vice president who’ll keep quiet and magsisipsip sa presidente para lang after six years, ikaw ang i-endorse. In any position I take, I will be outspoken…”  he said  during a weekly forum  at the Senate Thursday.

“If you’re going to run, you have to run to make a difference and I think I’ll make a bigger difference if I ( run for) president but I’ll decide that somewhere June or July,” he said.

But Cayetano said he would be willing to sacrifice his ambition in exchange for peace in Mindanao.

(I think this issue is bigger than the presidency. As I mentioned yesterday, if this will affect my chances like what some people are saying, then I would rather not be president so there would be peace and progress in Mindanao and it would not secede from the Philippines.)

“It’s not that I don’t care. I’ll be a hypocrite if I say that I don’t care but I’m willing to lose, I’m willing not to be president, I’m willing not to run or not to be president but I’m not willing to lose Mindanao and I’m not willing that we cause an all-out war or a civil war in Mindanao,” said Cayetano, who withdrew his support for the proposed Bangsamoro Basic Law, following the January 25 Mamasapano incident.

The senator then took a swipe at candidates who were  silent on certain issues for fear of possible effects on  their bids.

(Because now the trend is less talk, less mistakes, so there are many candidates who do not air their stand on controversial issues like RH, the Mamasapano incident, etc.  or they would only issue motherhood statements)

(Why? Because if you give a motherhood statement, general statements, no one will be hurt, your voters are intact . The problem is it does not provide you a solution. The problem is, when [a candidate] becomes president, then you’ll just be surprised)

Cayetano said that unlike other candidates, he would not sacrifice who he is and what he believes in just to win in the elections.

(That’s how traditional politicians operate. They find out what people want, and they change themselves to fit that mold. But are you sure that what the people want is the same to what they need?) ID