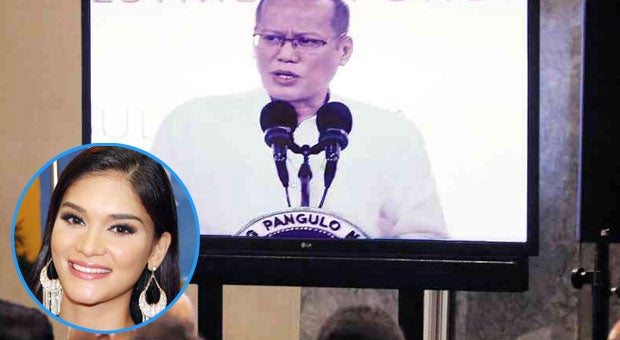 MANILA, Philippines–Despite a steep drop in his latest approval ratings and continuing criticisms over his handling of the Mamasapano incident, President Aquino on Wednesday sounded upbeat and ready to move on to happier pursuits—finding a life partner, for one.

In Wednesday’s gathering to celebrate International Women’s Month, Aquino introduced himself as “single, with no children,” who was avidly counting the days till his presidency was over so he could finally focus on love.

The President’s self-introduction was met with laughter from the more than 5,000 women in the audience, most of them variety store and food stall owners from Metro Manila who had gathered to celebrate Women’s Month at SM Mall of Asia (MOA) Arena in Pasay City.

President Aquino joined Secretary Joel Villanueva, chief of the Technical Education and Skills Development Authority (Tesda) and Coca-Coca Philippines president Diego Granizo in honoring the women entrepreneurs, who were among at least 30,000 beneficiaries of the beverage company’s STAR program.

Short for Sari-Sari Store Training and Access to Resources, the STAR program hopes to empower some 5 million women by 2020 by giving them access to skills training and business resources.

The 55-year-old President again poked fun at his status when he recalled what his former colleagues in Congress had said of the women’s month celebration.

“They asked, why should this month be set aside and deemed special for women? Why, they added, don’t they regard their wives as special enough, day in, day out? Of course, being single, I have absolutely no experience in that regard,” Aquino said, to much laughter from his listeners.

A Palace official seated near members of the Malacañang Press Corps at Wednesday’s event volunteered that the President has been “really happy these days because, apparently, somebody’s making him happy.”

But the official quickly backtracked and said that the President and newly crowned Miss Universe Philippines Pia Wurtzbach were not yet in a serious relationship, although they seem to be enjoying each other’s company.

The beauty titlist is “a deep thinker, and that’s what the President wants,” the Palace official said, adding, “If I’m not mistaken, it was your Lifestyle editor Thelma San Juan who introduced the couple to each other” a few weeks before the beauty pageant this year.

In a recent interview on the TV talk show “Aquino & Abunda Tonight,” the 25-year-old Wurtzbach did not directly answer questions about her dating the bachelor President, although she admitted to knowing and talking to him, and finding the Chief Executive “very fun to talk to.”

Cohost Kris Aquino, the President’s youngest sister, appeared satisfied with the beauty queen’s response. “Please make him happy. He needs it … I will be a nice sister-in-law, I promise,” she told Wurtzbach.

Added deputy presidential spokesperson Abigail Valte: “Like any [other] person, [Mr. Aquino] has expressed his desire to keep some matters private.”

In a text message, Valte said: “As a matter of policy among us spokespersons, we do not comment on [the President’s] personal life.”

At the MOA gathering, President Aquino hailed the women entrepreneurs for helping the country’s economy grow. He also expressed hope that the number of STAR beneficiaries would exceed the program’s 200,000 target by 2020.

“Our women entrepreneurs are no longer just helpmates or homemakers,” Aquino said, adding that women have contributed a lot to the country’s progress and economic growth.

Villanueva said as much. “Women entrepreneurs are now recognized as hardworking, ingenious persons who can create jobs and who can prosper in the community through their innovative ways.”

Granizo also cited the women whom he called the “pillars of the Coca-Cola business here in the Philippines.”

Added lawyer Adel Tamano, Coca-Cola vice president for public affairs: “For us to have thriving communities and better economies, we need to invest on women.”