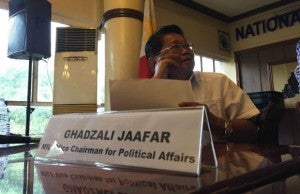 “After talking to them, we will decide what kind of disciplinary action will be imposed (on them), and one is possible suspension,” he said.

“Disciplinary action like suspension runs for several months,” he said. “After serving the suspension, they could be reinstated to their posts or not.”

“They were not allowed to carry or use their firearms, [which] were stored inside the camp and logistical support was cut off,” Kabalu said.

He said Kato was suspended in 2005 after the commander and his men attacked a military detachment in Mamasapano, a violation of the ceasefire agreement with the government.

At a news conference in Manila on Wednesday, Jaafar said the commanders of the 105th and 118th bases were liable for failure of intelligence.

“We want to find out why, if they knew Marwan was there, they did not report it to their immediate superiors,” he said.

The Department of Justice (DOJ) is also investigating the clash, with the deadline for the submission of a report getting extended on Wednesday to April 16.

Justice Secretary Leila de Lima the DOJ National Prosecution Service and the National Bureau of Investigation had asked for a two-week extension because they were still interviewing witnesses.

“Their original deadline is April 2, which is next week, and it’s also Holy Week. I think their request is reasonable,” De Lima told reporters.

“These will be considered in the evaluation and the sourcing of facts and information. In fact, [the investigative team] will be inviting those mentioned in the [police] report for clarificatory questioning. I’m stressing that since our interest is criminal liability, the reports are a big help, although we also have our own sources of facts and evidence,” De Lima said.

Cause of deaths, injuries

“The laxity exhibited by the two base commands, perhaps influenced by overconfidence in the relative peace obtaining in their communities brought about by the ceasefire agreement with the government and the signing of the Comprehensive Agreement on the Bangsamoro, should not go unnoticed. This attitude should not be tolerated,” the report said.

“When Marwan was killed, he was with the group of Basit Usman in the vicinity where the BIFF and the breakaway group of Mohammad Ali Tambako are based,” the report said.

Tambako is the leader of the JIM. He was arrested in a combined military and police operation in General Santos City on March 15.