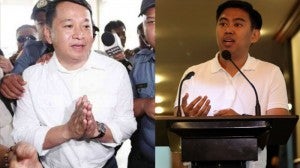 MANILA, Philippines — Two mayors lead two flag ceremonies, each asserting that he is the legitimate head of the country’s richest city.

Binay held the flag-raising ceremony at the City Hall quadrangle attended by city employees and hundreds of supporters, who camped out on the grounds overnight. They all wore black shirts.

Senator Nancy Binay was also at the rites in support of her brother.

Meanwhile, Peña’s supporters, all in white, attended the acting mayor’s first flag-raising ceremony at the Old City Hall, a stone’s throw away from where Binay and his supporters were.

The messages on the shirts of Peña’s supporters included: “Saan Galing Ang Yaman?” (Where did the money come from) and “Thou Shall Not Steal,” in apparent reference to the Binay clan whose members face allegations of corruption before the Senate and the Office of the Ombudsman.

Peña lauded his supporters for coming to his flag-raising rites “in short notice” to witness the “historic” ceremony.

Later, his camp held a program during which some Makati residents pledged their support for the acting mayor.

The standoff in the city stemmed from a March 11, 2015, order by the Office of the Ombudsman suspending Binay and other city hall officials for six months while they are investigated for their supposed involvement in the allegedly overpriced Makati City Hall Building 2.

The suspension order was served on March 16 by the Department of Interior and Local Government (DILG) and Vice Mayor Peña was sworn in as the city’s acting mayor. Hours later, the Court of Appeals issued a 60-day restraining order on Binay’s suspension.

The DILG, Department of Justice and the Office of the Ombudsman insist on the legitimacy of Peña as acting mayor, saying the restraining order came “too late” and was thus moot and academic.

Binay, on the other hand, maintains that the court’s order overrules the suspension order.

BACKSTORY: Mayor Binay: Clarificatory questions should be raised in CA, not DOJ

BACKSTORY: De Lima says Ombudsman’s orders, rulings can be reviewed only by SC