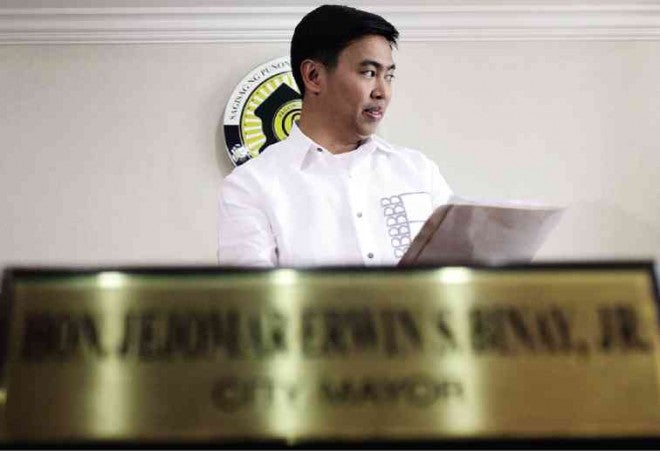 Makati government employees, wearing black shirts, took a break from work on Friday to protest what they claimed was the “continued defiance” of the Department of the Interior and Local Government (DILG) of the appellate court’s temporary restraining order (TRO) stopping the Ombudsman’s suspension of Mayor Jejomar Erwin “Junjun” Binay, who is under investigation for corruption.

Rallying behind the embattled Binay, who has been holed up in his office on the 21st floor of the City Hall since the standoff began last weekend, the employees said they were concerned that the legal conflict would delay the release of their salaries and hamper the operations of the city government.

The DILG, which sent a police complement to serve the suspension order on Monday, wants Binay to vacate his office and allow Vice Mayor Romulo Peña, who has been sworn in as acting mayor, to do his job.

From the adjacent old Makati municipal hall, with hallways that reek of leaking toilets, Peña issued a memorandum on Friday to all City Hall employees asserting his authority.

“All ordinances, official documents and official actions must be submitted and referred to the undersigned for approval and/or appropriate action,” Peña said, referring to himself.

The political struggle is seen as a battle between the ruling Liberal Party (LP) and the United Nationalist Alliance of Vice President Jejomar Binay, the Makati mayor’s father. The LP is led by President Aquino and Interior Secretary Mar Roxas, the LP’s presumptive nominee for president in the 2016 presidential elections that the vice president has already declared he would contest. Roxas was narrowly defeated by the older Binay in the vice presidential race in 2010.

The Binay family claims the mayor’s suspension over graft allegations in connection with the allegedly overpriced Makati City Hall Building II was politically motivated as the older Binay continues to dominate the presidential preference polls.

The bitter standoff has plunged Makati, the country’s financial capital, into chaos, forcing courts to close and delaying government business.

The protesting employees read in chorus a prepared statement calling on higher authorities to give them their due.

“Instead of appeasing us by sending armed troops around City Hall, we fear that untoward incidents may happen due to their defiance of the court order,” the statement said.

They fear that their salaries, which should be released by March 31, would be delayed “as a result of the Department of the Interior and Local Government’s intrusion [into] Makati City’s affairs.”

Renato Brion, the DILG regional director for Metro Manila, earlier sent a letter to the Makati branch of the Land Bank of the Philippines saying that Binay was not the authorized signatory of all disbursements of the city since he has been suspended for six months.

Binay denounced the letter and claimed that the DILG was only tasked to implement the Ombudsman’s suspension order. He has sent Landbank a letter saying that there was an existing TRO against his suspension.

“We will not allow them to simply do this to us. They should follow the order of the higher courts,” said Reginald Millarez, a district manager at the city’s environment services department.

The Binay family spokesperson, Joey Salgado, warned of a looming crisis over who had the authority to sign the city government’s checks.

If banks do not honor checks signed by Binay, street lamps and traffic lights will be shut down, taps in government buildings will run dry and garbage collection will stop, according to Salgado.

“This is a very dangerous situation, if their (the national government’s) actions result in delays in salaries, utilities,” he said.

“Any perception of instability would have an effect on the country. They are sending the wrong signal to investors. Makati is the financial center of the country,” he said.

READ: Who is the legal mayor of Makati?

The presence of the two mayors in Makati has left some residents confused.

“The truth is really confusing for us. But they (authorities) should just pick one. I don’t care who they choose as long as City Hall will be back to normal” said tricycle driver Romano Ramos.

He noted that the large volume of people going to the City Hall grounds to join the vigil in support of Binay has been causing traffic jams, especially during the rush hours, eating away their time and possible income.

Susana Seya, a housewife living in Barangay Singkamas, in an interview at the City Hall compound, said the younger Binay should just step down to allow the concerned agencies to investigate the allegations of corruption against him and his family.

“The processing of the yellow card is taking a while because the City Hall is locked down,” said Seya with her toddler in tow. The yellow card is an identification document for the residents’ subsidized medical care.

Seya said ever since former Vice Mayor Ernesto Mercado, a former ally of the Binays, exposed alleged corrupt practices in Makati, she and her family have been disappointed with the Binays, whose members have taken key elective positions in the government.

“We just want the truth,” she added.

One resident who brings food to City Hall employees expressed the wish that the standoff will be over.

“Look how dirty and unkempt this place is,” she said, refusing to give to the Inquirer her full name.

Since there was only one entrance to the City Hall, employees and residents often got stuck in the traffic of people.

The 22-story City Hall building remained partially locked down with only one guarded entrance to it.

Salgado said the reason for the lockdown was because their camp has been receiving reports that Peña was sending supporters to the City Hall for an attempt to take over the mayor’s 21st floor office.

Binay’s legal counsel Patricia Alvarez noted that there should be no different interpretations of the TRO.

“It only meant one thing according to previous decisions of the Supreme Court. The TRO is issued for the purpose of maintaining a status quo at the time of the filing of the case,” Alvarez said noting that Binay was the city mayor when the petition for TRO was filed at the appellate court.

But Justice Secretary Leila de Lima and Ombudsman Conchita Carpio Morales said the TRO that Binay obtained was already “moot” because the suspension order had been served.

“In that case, the position of the DOJ [Department of Justice], DILG and the Ombudsman is an insult to the Court of Appeals,” Alvarez said. With a report from AFP