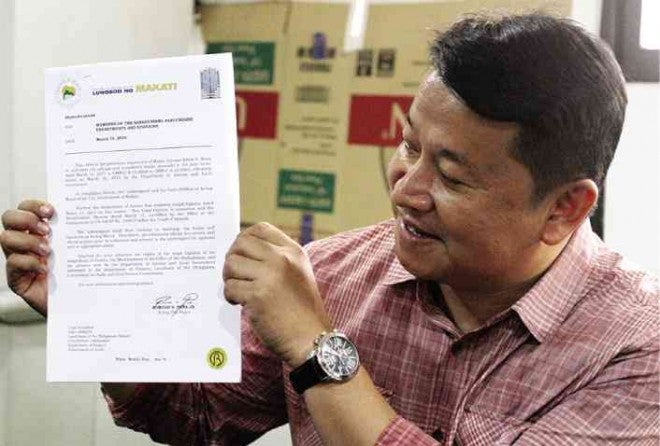 Makati Vice Mayor Romulo Peña Jr. began holding office in a small room on the second floor of the rundown old Makati municipal building from which he issued his first memorandum as the acting mayor on Friday.

The office, measuring about 20 square meters and with some of its rusty windows haphazardly covered with cardboard, was where Peña received guests and did some paper work.

A nameplate written on white paper which read “Hon. Romulo Peña Jr. Acting City Mayor” sat on his desk. His staffers worked in the hallway leading to Peña’s office.

Reporters took notice of a strong smell, apparently coming from a nearby toilet.

“The water supply was cut off just today. We are still fixing that,” Peña said.

In the afternoon, Peña had a closed-door meeting with Senior Supt. Carmelo Valmoria, the National Capital Regional Police Office chief; Renato Brion, regional director for Metro Manila of the Department of the Interior and Local Government (DILG); and Senior Supt. Serio Soriano of the Bureau of Fire Protection.

“They were here to give some guidance,” Peña said.

The DILG, which served the Ombudsman’s order suspending Makati Mayor Junjun Binay for six months, insists that Peña is the acting mayor despite the temporary restraining order that Binay obtained from the Court of Appeals (CA) stopping the suspension.

“We are assisting the DILG. We are here to ensure the security in the area,” Valmoria told reporters.

Peña said that he and his staff are taking over the functions of Makati mayor “one day at a time.”

“Always remember that I didn’t want this position. It came to me since I was the vice mayor. I’m sworn to assume the mayoralty post in case it is vacated,” he said.

Peña said he has been going around the city to hear out the people’s sentiments.

Binay, who has refused to cede his office on the 21st floor of the Makati City Hall to Peña, on Friday met barangay captains and councilors who pledged their continued support.

Peña on Friday issued his first memorandum as acting mayor to the heads of the departments and divisions concerning the suspension of Binay.

However, acting city administrator Vissia Marie Aldon said she and the other City Hall officials had not received the memorandum.

“We only recognize one mayor and it is Mayor Jun Binay,” said Aldon, who claimed to be speaking for all the department heads.

Binay’s lawyers said they were studying the filing of usurpation of authority charges against Peña.

“If he signs it as acting mayor it will be illegal. It will be in violation of the court order,” said lawyer Patricia Alvarez.

“If the vice mayor does not comply or if the persons enjoined under the CA resolution do not comply with that order, then they will be liable for contempt,” she said.

Alvarez said the Binay camp was still gathering documents showing acts of the vice mayor constituting usurpation of authority, which they will verify and consider in deciding to file charges against Peña.