SAF survivor reveals why Marwan’s finger given to FBI 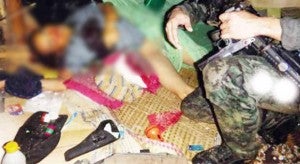 MANILA, Philippines — The Special Action Force (SAF) had to give the finger of slain terrorist Marwan directly to the Federal Bureau of Investigation (FBI) because the American agency had the DNA profile of the terrorist’s brother.

Superintendent Raymund Train, one of the 16 survivors of the bloody operation to get Marwan, told INQUIRER.net it was also important to immediately determine that the right index finger actually belonged to Marwan, who was known as Zulkifli bin Hir.

“Time was of the essence and there’s already a public clamor for the validity of Marwan’s DNA. After the operation, many are doubtful that the man we killed was really Marwan,” he said in a phone interview.

“We were holding that piece of evidence to prove our claim and only the FBI had the database of his brother,” Train pointed out, referring to Marwan’s brother Rahmat Abhir.

BACK STORY: Marwan finger cut off for DNA

It was through the DNA of Rahmat, who is detained at a US detention facility in California, that the FBI confirmed the Malaysian bomb expert’s identity.

Rahmat was arrested in California in 2007 on charges of conspiring to provide material support to terrorists and giving false information to authorities.

Forty-four SAF commandos, 18 Moro Islamic Liberation Front fighters and five civilians died when the mission was carried out on January 25 in Mamasapano town in Maguindanao.

Marwan, who had a $5-million bounty on his head, was killed on the spot while the two other targets: Abdul Basit Usman and bomb expert Amin Baco, managed to escape.

Train led the US-trained Seaborne of the 84th SAF Company, which served as the “main effort” to get Marwan in his hut in Barangay (village) Pidsandawan.

Train broke his silence after the Philippine National Police said that former SAF commander Police Director Getulio Napenas and resigned PNP chief Director General Alan Purisima should be investigated for allegedly instructing him to give Marwan’s finger to the FBI.

READ: Napeñas mum as to why Marwan’s finger was turned over to FBI

PNP spokesperson Chief Superintendent Generoso Cerbo Jr. said the SAF might have violated the PNP protocol of turning over evidence to the FBI after a law enforcement operation.

“There are protocols in the PNP when gathering pieces of evidence. It should be within the channels of the PNP. In the case of Oplan Exodus, the SAF should have sent the finger to the PNP Crime Laboratory for DNA testing,” Cerbo told reporters in Camp Crame.

The police official said the FBI’s involvement in the DNA testing “deserves to be investigated to see if the Napenas and Purisima violated protocol in that aspect.”

Police ties with US

Cerbo sees nothing wrong with the PNP’s partnership with the US.

“It is true that we receive assistance in training, equipment and information sharing from our US counterparts. And these are the things that we’re really not hiding. In fact, we’ve conducted trainings here in Crame that are 100-percent financed by the US,” he said.

The PNP spokesperson even cited the donation from the US Embassy, through Ambassor Philip Goldberg, of equipment to the PNP Maritime Group in Bongao, Tawi Tawi, on Tuesday.

“But with respect to Oplan Exodus, only Napeñas could tell the extent of the US involvement in the operation,” he added.