‘Aquino left nothing to chance’ 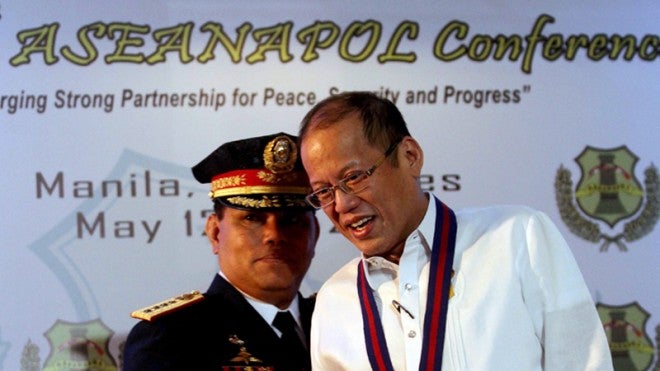 Malacañang on Saturday minced no words in calling out the Philippine National Police for concluding that President Benigno Aquino III violated the chain of command when he allowed suspended PNP chief Alan Purisima to have a role in a bungled counterterrorism mission that cost the lives of 44 police commandos on Jan. 25.

Still, President Aquino will address the 172 graduates of the Philippine Military Academy (PMA) on Sunday with a dark cloud hanging over his head after the PNP board of inquiry report said he violated the chain of command in the execution of the Special Action Force (SAF) mission to take down terrorists Zulkifli bin Hir, alias “Marwan,” Basit Usman and Amin Baco.

“The first and most basic fact is that the [PNP] is a civilian institution, established to replace the Philippine Constabulary-Integrated National Police (PC-INP). As a civilian institution in the executive branch of government, the President, as Chief Executive, exercises full and absolute control and supervision over every official in that branch,” presidential spokesperson Edwin Lacierda said in a statement.

“The BOI (board of inquiry) itself recognized this in its report when it acknowledged that it was the President’s prerogative to issue direct orders to the Special Action Force (SAF) head,” he said.

“However, the BOI subsequently contradicted itself when it suggested that the President should have followed the PNP chain of command. In invoking the chain of command rule, it is important to point out that this rule applies only within the PNP,” he said.

“It cannot, as the BOI itself inferred in an earlier part of its report, deprive the Chief Executive of the opportunity to exercise his inherent authority and discretion. The President as Chief Executive cannot be subordinated to an internal process within the PNP when he has control and supervision over all its members, regardless of rank,” Lacierda said.

Lacierda also said that President Aquino could have clarified some points with the BOI had he received an official request from the fact-finding team.

But there was none, he said.

The BOI head, Senior Supt. Benjamin Magalong, himself could have also brought up the interview in a meeting with the President that he attended along with other senior PNP officials but he did not, Lacierda said.

They did not ask Aquino

“The BOI in its efforts could have asked the President to clarify matters. The President would have answered any questions they may have had. But no official request was made. Instead, it introduced innuendos and resorted to speculations to reach some of its conclusions,” he said.

“This is all the more unfortunate because the head of the BOI, together with other senior officials of the Philippine National Police was present in a meeting with the President where Senior Supt. Benjamin Magalong had the opportunity to ask the President questions or seek further clarifications. As head of Criminal Investigation and Detection Group (CIDG), Senior Supt. Magalong should be particularly aware of the need for due process to be observed,” he said.

Lacierda also stressed that what should stand out was that President Aquino instructed Purisima to coordinate with Deputy Director General Leonardo Espina as the PNP officer in charge.

“The President therefore left nothing to chance. His direct orders to Purisima if obeyed, would have ensured that the OIC Chief PNP would not have been kept in the dark. However, the President was disobeyed by Purisima,” Lacierda said.

Lacierda’s statement hinted that President Aquino was disappointed with Purisima, a good friend whom the President had defended several times.

“But even setting aside this internal contradiction in the BOI report, one other fact should stand out. The President himself instructed the suspended Chief PNP, Alan Purisima, to inform the OIC Chief PNP of the mission,” Lacierda said.

He stressed that the President “left nothing to chance.”

“His direct orders to Purisima if obeyed, would have ensured that the OIC Chief PNP would not have been kept in the dark. However, the President was disobeyed by Purisima,” Lacierda said.

“These points are basic to a proper appreciation of the roles officials were expected to play in Mamasapano and the severity of the consequences of decisions made by those officials who disobeyed the President,” Lacierda said.

The BOI report released on Friday said the President, Purisima and Director Getulio Napeñas, the SAF commander who was sacked in the aftermath of the Mamasapano debacle, kept the counterterrorism mission to themselves, deliberately not informing Espina about it, thus violating the PNP chain of command.

But Justice Secretary Leila de Lima, also defending the President yesterday, said chain of command was a military concept that may not be applied to the relationship between the President and the PNP.

President Aquino, she said, “is not the Commander in Chief of the PNP,” as the PNP is not part of the Armed Forces of the Philippines under the 1987 Constitution.

The board of inquiry’s hierarchical view of responsibility is erroneous, said De Lima, who had explained the difference between the military and the police in her appearance at the Senate investigation of the Mamasapano clash.

“Based on a wrong premise, the BOI report on the nature of the President’s role can only arrive at a wrong conclusion,” De Lima said.

She described the board’s view of the President’s standing in the PNP organization as an “unconstitutional and even illegal operating premise” that “cannot bind the President.”

A military source, however, said the board of inquiry’s findings showed that President Aquino is “the weakest link in the chain of command.”

The source, a ranking military tactician, spoke to the Inquirer on condition of anonymity because he had no clearance to speak to reporters or to relay “the real sentiments” of “most soldiers” about the Mamasapano debacle.

“Where can you find a Commander in Chief who would give an operation to a suspended PNP chief?” he said.

“Why, is friendship weightier than the chain of command?” he said.

The source said the military was aghast at how President Aquino blamed the debacle at Mamasapano on Napeñas when he himself was at the top of the operation.

Napeñas found the board of inquiry report “generally fair,” according to his lawyer, Vitaliano Aguirre.

Aguirre said Napeñas was glad that the board of inquiry found that he was not solely to blame for the deaths of the 44 SAF commandos.

But Napeñas, Aguirre said, found the report to have “inaccurate and baseless” conclusions, including his supposed loss of control and supervision over the mission and the supposed unfamiliarity of the SAF commandos with the terrain in Mamasapano.

Aguirre said Napeñas had a video of the area taken by a reconnaissance mission and showing Marwan resting in his hut.

“We are ready to share that video to prove that the SAF studied the terrain before the operation,” Aguirre said. With reports from Tarra Quismundo, Cynthia D. Balana and Marlon Ramos