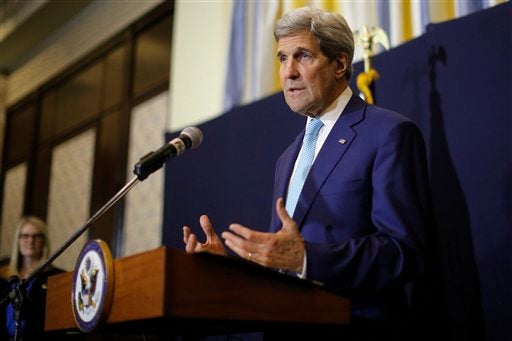 US Secretary of State John Kerry speaks at a news conference in Sharm el-Sheikh, Egypt, Saturday, March 14, 2015. Kerry said he’s returning to nuclear negotiations with Iran with “important gaps” standing in the way of a deal. He spoke Saturday in the Egyptian resort, where he attended an economic conference. AP

SHARM EL-SHEIKH, Egypt — US Secretary of State John Kerry on Saturday delivered a highly cautious assessment ahead of the next round of nuclear talks with Iran, citing “important gaps” in the way of a deal before an end of March deadline.

At a news conference in Egypt, where he attended an economic conference, Kerry also said a US decision would come shortly on unblocking hundreds of millions in suspended military assistance for the Egyptian government.

Three days before Israel’s election, America’s top diplomat expressed hope that any government voted into power “meets the hopes for peace” in the Middle East.

But on the Obama administration’s No. 1 foreign policy priority, talks with Iran to curb its nuclear program, Kerry was circumspect.

He said only a negotiated agreement could provide long-term assurance that Tehran would not develop nuclear weapons. But with a deadline just two weeks away, he could not say whether the United States and other world powers would be able to reach a framework accord with the Iranians or even were close.

“We have made some progress but there are still gaps, important gaps, and important choices that need to be made by Iran in order to move forward,” Kerry told reporters in the Red Sea resort of Sharm el-Sheikh. “The purpose of these negotiations is not just to get any deal,” he said. “It is to get the right deal.”

Speaking after a week of US political fighting over the diplomatic outreach to Iran, Kerry lambasted Senate Republicans who signed an open letter to Iran’s leaders suggesting any deal they reach with the administration could expire the day President Barack Obama leaves office.

Such tactics, which Kerry called unprecedented, will inevitably raise questions among Iran and America’s allies in the talks, he said.

The conflict between the administration and mainly Republicans in Congress has emerged as among the tensest subplots to the diplomatic effort. Because US lawmakers can block the lifting of some penalties against Iran and potentially pass additional trade or financial restrictions, they hold the power to undermine an accord. They are pressing for at least a say in whether any deal the U.S. and its partners reach is acceptable.

Negotiators are talking about freezing Iran’s uranium and plutonium programs for at least a decade in exchange for a gradual easing of economic pressure on the Iranians. Many in Congress say the US should hold out for greater dismantlement of Iran’s nuclear infrastructure. But opponents of a deal have been vague about what types of continued nuclear activity — if any — they would deem acceptable.

“What’s the alternative?” Kerry asked. “In previous years when US policy was not to talk to Iran and insist at the same time that they can have no nuclear program, whatsoever, the number of centrifuges skyrocketed. Every time negotiations have broken down in the past, Iran’s nuclear program has advanced.”

Kerry, who was schedule to travel Sunday to Lausanne, Switzerland, for several days of discussions with Iranian Foreign Minister Mohammad Javad Zarif, noted the Islamic Republic’s longstanding claims that it has no interest in assembling a nuclear arsenal. Its leaders have issued a fatwa, or formal religious ruling, against such weapons.

The United States, he said, has “great respect for the religious importance of a fatwa.” But negotiators need an agreement that translates that commitment into an agreement that can “guarantee that Iran’s program will be peaceful now and peaceful forever.”

“We still don’t know whether or not we will get there,” Kerry said. “It may be that Iran simply can’t say yes to the type of deal that the international community is looking for, but owe it to the future of everybody in the world to try to find out.”

On Egypt, Kerry said a decision would come “very soon” on F-16 fighter jets, tanks and other materiel the Egyptians say the need to combat an extremist threat operating in the Sinai Peninsula and spilling over from lawless Libya.

The aid was suspended after the military’s 2013 takeover of the government. The US administration considers its resumption critical for Mideast stability, but must first certify Egyptian progress on human rights, democracy and the rule of law, or issue a declaration that such aid is in the interests of US national security.

Ahead of Israel’s national election Tuesday, Kerry emphasized how Democrats and Republicans alike have sought peace between Israelis and Palestinians for decades. The US is hopeful that “whatever the choice the people of Israel make,” peace efforts can resume.

Kerry said he did not want anyone to misconstrue his comments as interference with the vote. Obama’s relationship with Prime Minister Benjamin Netanyahu reached a new low earlier this month when the Israeli leader sharply criticized American policy on Iran in an address before the US Congress.

Kerry said he could only repeat US “hopes that the choice that the people of Israel make will not only meet their needs domestically and their hopes in their country, but obviously meet the hopes for peace which I think everybody shares.”