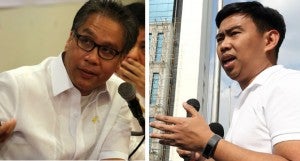 Binay was reacting to the statements of Roxas saying the camp of the embattled mayor should stop the “drama” at the city hall and respect the suspension order of the Office of the Ombudsman.

Roxas had said the challenge of the Binay’s camp for him to personally issue the suspension order was a display of “high school mentality.”

“We do not resort to pettiness and name-calling. Secretary Roxas is a lot older than me. I would have expected him to show some maturity,” Binay said in a statement.

“We understand the situation of Secretary Roxas. He is under a lot of stress. We are also undergoing a stressful situation but we rise above it,” he said.

Since the Ombudsman ordered the suspension of Binay on March 11, the mayor remained holed up in his office pending the motion for a temporary restraining order they filed in the Court of Appeals.

“I find his description of our decision to bring the Ombudsman’s irregular and unlawful order before the courts as ‘juvenile mentality’ petty and condescending. It also betrays either an ignorance of or total disregard for the rule of law and due process,” he added.

He said Roxas and the Liberal Party of the Aquino administration have “displayed several times its selectiveness in applying the law, especially when it involves LP members.”

In previous interviews, the Binay’s camp had said Roxas was using “dirty tactics” to derail the 2016 presidential bid of Vice President Jejomar Binay.