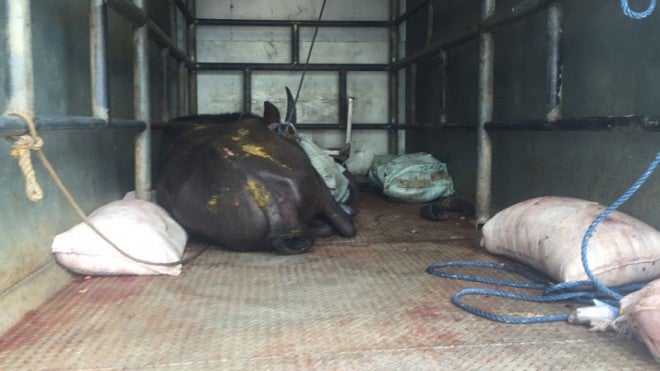 NO FACE TO SHOW: Carabao escapes potential butchers and goes wild in Cubao.

MANILA, Philippines—Sensing his death, a carabao went wild in a slaughterhouse and injured three people in Cubao, Quezon City, before dawn on Saturday.

Police Supt. Edgar Bangay Osam of the Cubao Police Station 7 said the carabao managed to escape after it was unloaded from a delivery van at around 3 a.m.

Osam said the beast hurriedly ran toward Mega-Q Mart and attacked Junet Rufino, 35, and a butcher inside the slaughter house.

Rufino told INQUIRER.net that he was surprised when the carabao hit him, resulting in injuries on his right leg.

He said he immediately lost control and fell on the floor then lost his consciousness.

The carabao continued to run away, injuring a man on its path identified as Willy Aries, 44, who only went to a nearby store to buy some goods.

According to Aidwenn Servantes, companion of Aries, his uncle was crossing the street when the carabao attacked him.

Aries then removed his shorts to escape from the carabao.

Servantes said his uncle got injured and sustained bruises all over his body after he was tossed by the angry carabao.

The carabao managed to proceed to Aurora Boulevard where it continued to go wild and injured Maria Tanion.

Tanion, a 32-year-old call center agent, was surprised when an oncoming carabao attacked her.

Tanion hit her head on the pavement and lost consciousness.

The beast ran away and entered the lobby of a small hotel and tossed some furniture before it entered the Telus call center office near Araneta Coliseum where it was caught and contained.

It broke some glass panels at the reception area but no one was hurt, although the building had to be evacuated.

The three victims were rushed to the Quirino Medical Center in Quezon City. 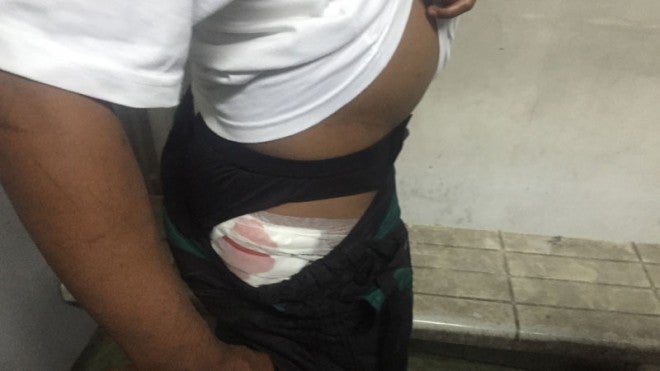 Junet Rufino shows the injury he sustained after being attacked by a wild carabao at the Mega-Q Mart in Cubao, Quezon City.

Rufino was discharged after medication.

Aries, according to his nephew Servantes, has not been discharged from the hospital since he has yet to settle his medical bills.

Tanion, meanwhile, was confined due to the injuries she sustained.

The driver of the delivery van, Domingo Nocedal Jr., said the carabao was with 29 other carabaos and nine cows inside the container van.

Nocedal said they traveled from Naga in Camarines Sur and went to the Mega-Q Mart slaughterhouse to deliver the animals.

Rufino and Servantes went to the Cubao police station to have the incident blottered.

Rufino said they would not file a complaint if the owner of the carabao would settle their hospital bills, medication, and their wages for the day.

Nocedal said he already contacted his boss who promised to extend financial assistance to the victims.

SPO1 Kingly James Bagay told INQUIRER.net the carabao remained at the police station but was subject for release upon the order of the fiscal.

Bagay said Rufino signed an agreement that he would not file charges against the delivery men and the carabao owner as long as his medical expenses, medication and his wage for the day were paid for.

According to Bagay, the two other victims say they will pursue the filing of charges.

He said Nocedal, including his companions identified as Dante Floresca, 32; Edwin Perez, 31; and Adrian Fresco 25, would be charged with reckless imprudence resulting in physical injuries.

He added that the owner of the carabao, Mario Ramos, would face civil liability.

Bagay said Mega-Q Mart was a legitimate slaughterhouse and that the delivery men had a permit. With a report from Agence France-Presse

Carabao on way to slaughterhouse goes berserk, is shot dead