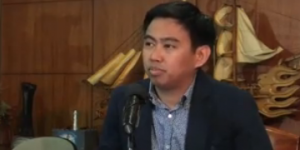 MANILA, Philippines–Suspended Makati City Mayor Jejomar Erwin “Junjun” Binay on Thursday maintained that he will not leave the city hall as this would be seen as an “act of surrender.”

Binay said that he will not let a member of the Liberal Party take on the reins of the city leadership.

(If we leave here, it’s like we have surrendered the city hall. We will not allow a member of the Liberal Party to take over because of this suspension order.)

The Liberal Party is the administration party under President Benigno Aquino III.

Makati’s incumbent vice mayor is Romulo Peña Jr., a member of the LP.

He said that he will stay at the City Hall until the Court of Appeals act on the Petition for Certiorari filed by his camp.

(Until we deem it necessary to stay here, we will not leave.)

Binay said that he was joined by his father, Vice President Jejomar Binay, and other family members when he stayed overnight at his office in the city hall. Hundreds of his supporters also held vigil in the city hall.

The older Binay advised him to stand firm, he shared.

He hit the decision by the Ombudsman as “politically motivated” and that it is connected to the 2016 elections.

“We stand firm that it is part of ‘Operation Nognog’ and that this is really politically-motivated and it is all about the 2016 elections,” Binay said.

On Wednesday, the Ombudsman placed him and other city officials under a six-month preventive suspension due to the allegedly overpriced Makati City Hall Building II.