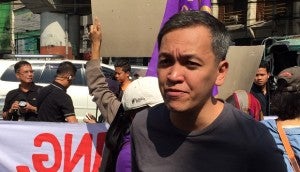 MANILA, Philippines – The Board of Inquiry (BOI) report on the botched Mamasapano operation should immediately be released to the public and not wait for President Benigno Aquino III’s response, a militant group said Thursday.

Bagong Alyansang Makabayan (Bayan) Secretary General Renato Reyes Jr. said the BOI could prove that there is no cover up or “yellow washing” of the Mamasapano report by releasing it to media after submitting it to the Philippine National Police (PNP) and the Department of Interior and Local Government (DILG).

Earlier reports said that Interior Secretary Manuel “Mar” Roxas will send a copy of the report to the Office of the President. Aquino’s legal team will first study the report before any public statement is made.

But Reyes said, “Any delay, especially coming from the President, bolsters the long-held fears of a cover-up.”

“While we do not expect much from the BOI in the aftermath of the President’s Monday speech, it is still necessary to be on guard against the continuing yellow-washing of the Mamasapano probe,” he added.

“Yellow washing” is a term coined from the phrase “whitewash” and the Liberal Party’s political color.

Reyes said Filipinos should be more discerning and oppose any attempts to cover up the government’s alleged poor handling of the operation. While relieved SAF commander Getulio Napeñas has taken responsibility for the Mamasapano debacle, Aquino has also been blamed for allowing resigned PNP chief Alan Purisima, who was at that time suspended on corruption charges, to direct the operation.

“Attempts to insulate the President and pin the blame solely on Napeñas will be rejected. The President has proven himself to be the biggest stumbling block to truth and accountability,” Reyes explained.

He reiterated the call for Aquino’s resignation amid public outrage of what happened in Mamasapano.