Australian ‘guru’ put teens in trance before raping them 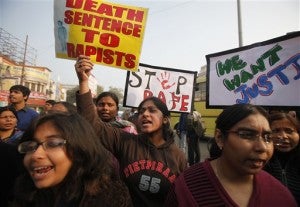 Indian students protesting against the brutal gang-rape of a woman on a bus last week in New Delhi, hold placards during a protest in Allahabad, India, Wednesday, Dec. 26, 2012. AP

AIX-EN-PROVENCE, France – An Australian man who passed himself off as a Hare Krishna “guru” was on Monday sentenced to 19 years in jail in France for repeatedly raping three teenage girls he turned into mesmerized sex slaves.

Sean O’Neil, a 43-year-old computer programmer, was found guilty by a closed-door appeals court in the southern French city of Aix-en-Provence of multiple rape and of corrupting minors.

The court rejected O’Neil’s argument the sex was consensual to confirm a lower court’s October 2013 conviction, and to lengthen an original sentence of 15 years in prison. It also barred him from re-entering France once he had served his time.

READ: Teen who allegedly tied, raped classmate says ’50 shades’ made him do it

O’Neil forced a total of four teenage girls to live as naked slaves in his French Riviera apartment in the town of Valbonne, where he subjected them to pornographic photo sessions and made them recite the Hare Krishna mantra 1,700 times a day.

The three girls he regularly raped between 2009 and 2010 while they were aged around 15 and made psychologically dependent on the Australian. One expert testified that the girls cooperated because they were in a trance-like state approaching “hypnosis”.

The victims described O’Neil as a “guru” who urged them to recruit other young virgins of the same age with the aim of starting a commune in Australia.

The crimes came to light in 2010 after one of the girls described what they were enduring to a school employee.