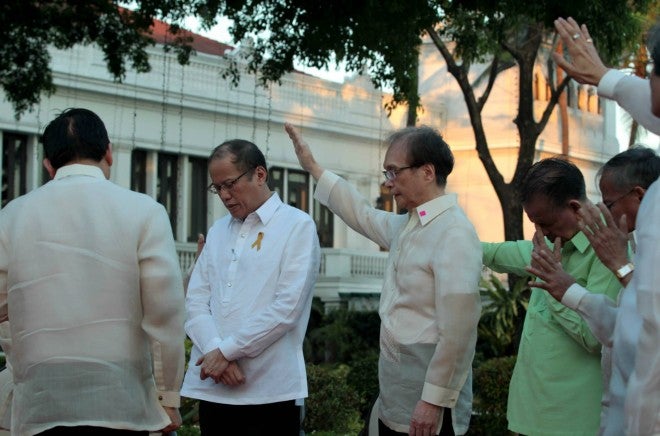 Religious leaders say a prayer for President Benigno Aquino III during a prayer gathering at the Malacañang Monday. Photo by Malacañang Photo Bureau

MANILA, Philippines – Perhaps they should reserve their prayers for other things. That was President Benigno Aquino III’s light-hearted quip to religious leaders after he was asked about his bleak love life.

“In God’s time,” he said, before adding that he hoped that he would at least have a girlfriend before he steps down as president of the country in 2016.

A heavy Coke drinker, Aquino shared another anecdote comparing his relationship status to the popular drink.

“One day, in [a Cabinet meeting], that was the topic, one of the secretaries asked me: ‘How’s your love life?’ As you know it used to be regular then it became light and a few years ago, it became zero. And now it’s below zero,” he said.

Secretary Joel Villanueva to pray for his love life every day, instead of just every other day.

Villanueva is the son of Bro. Eddie Villanueva, a former presidential aspirant and founder of the Jesus is Lord Church. The elder Villanueva was also the facilitator of the open forum during the prayer meeting.

It was during the said event that Aquino expressed anew his disappointment with former Philippine National Police-Special Action Force (PNP-SAF) commander Getulio Napeñas who headed the botched Mamasapano operation. At one point, he said Napeñas turned what was supposed to be a possibly successful mission into “mission impossible.”

Aquino repeated this term, perhaps unwittingly, when asked about his search for a life partner.

(One time he said, ‘Although I feel that sometimes this is like an impossible mission, with God’s help nothing is impossible.’ Perhaps you should start praying every day, Joel.) KS