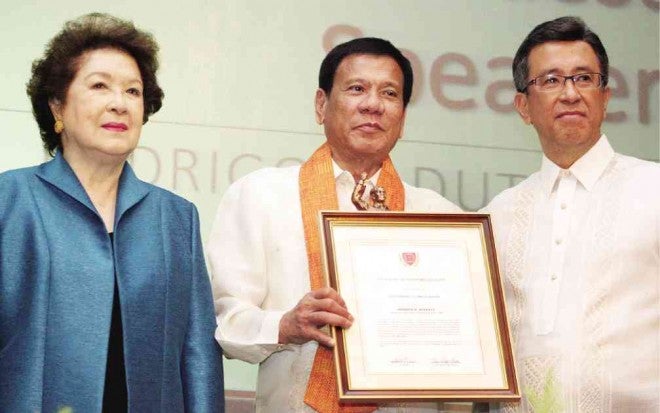 Davao City Mayor Rodrigo R. Duterte is this year’s Most Outstanding Alumnus of Lyceum of the Philippines University (LPU).

Duterte, who some quarters hope will run for President if only to enliven the 2016 elections, was cited for “his incalculable services, exemplary dedication to duty, and outstanding achievements in positions of high responsibility in … public service … bringing honor to … his alma mater.”

Various awards were also handed out to nonteaching and teaching personnel and students.

Duterte, who graduated with a Bachelor of Arts, major in Political Science, degree in 1968, said he was gratified by the award because he had received very few honors in his lifetime.

He attributed this to his not being scholarly. “It took me seven years to finish high school,” he said, eliciting laughter from the audience. “I am not really an extraordinary guy, 75-75 lang (I got grades of only 75).” 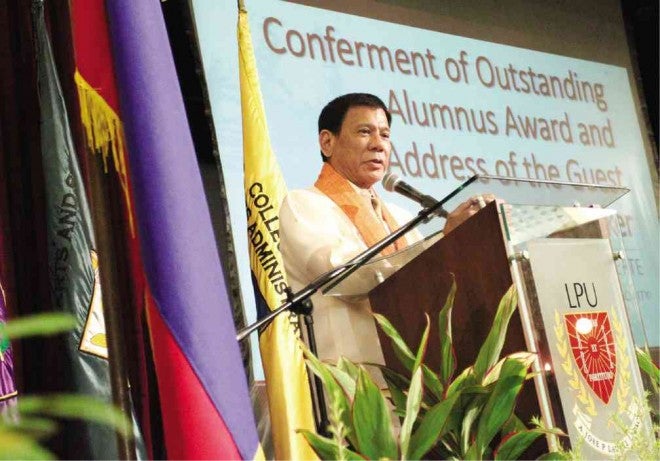 DUTERTE makes another pitch for federalism in his speech. KIMBERLY DE LA CRUZ

Duterte said he enrolled at LPU to study under Jose Maria “Joma” Sison, founder of the Communist Party of the Philippines (CPP); the Lava brothers (all members of the old Partido Komunista ng Pilipinas) and Jose David Lapuz.

Although he became a Kabataang Makabayan member, Duterte said he did not join the communist party. But what he “learned” at Lyceum made it easy for him to talk to the New People’s Army, the CPP’s military arm that remains active in many parts of the country.

He said he was a hard-liner when it came to crime but he respected the revolutionaries.

In his speech, Duterte addressed both his campaign for a federal type of government and efforts by some sectors to launch his candidacy for President.

He said federalism would help hasten development as every local government would have control over its own resources and use them in the way best suited to its needs.

At the moment, he said, local governments gave almost all of the money they earned to the national treasury.

On the Mindanao unrest, he gave his audience a brief historical background, pointing out that Islam had already taken root in Mindanao before the Philippines was colonized by Spain.

When the Spanish colonizers named the country “Filipinas” and its people “Filipinos” after the Spanish king at the time, Duterte said it was difficult for the Muslims in Mindanao to accept the change. They resisted also conversion to Catholicism.

As for the presidency, he laughed off the suggestion, saying he would be more interested in heading LPU if the Laurel family, which owns the school, would let him.

Duterte promised his LPU family that if and when he did become President, they would have priority as guests in Malacañang.

Duterte was Davao assistant city prosecutor for seven years, vice mayor for five years, congressman for three years and mayor for a total of 20 years.

After serving as vice mayor for three years, he was again elected mayor in 2013 for what would presumably be another three-term stint, unless, as someone put it during the convocation, “fate intervenes.”

Under Duterte’s administration, Davao City became known as the most law-abiding and safest city in the Philippines.