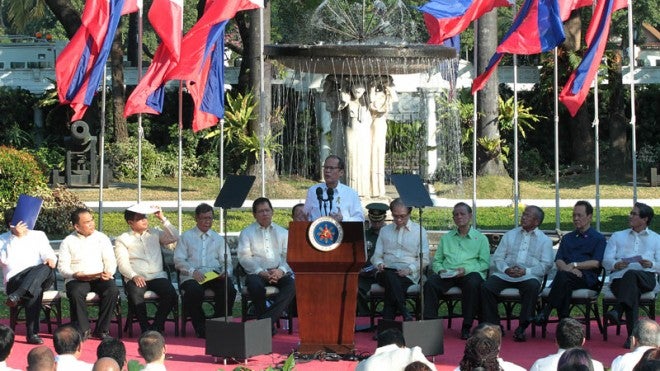 President Aquino delivers his message during a prayer gathering at the Malacañan Palace grounds on Monday. He again defended himself against public outrage over his refusal to take responsibility for the Mamasapano clash, saying the police counterterrorism operation would have had a different outcome had the ground commander followed his instructions to coordinate with the military. PHOTO BY GIL NARTEA/MALACAÑANG PHOTO BUREAU

MANILA, Philippines–President Aquino on Monday again defended himself against public outrage over his refusal to take responsibility for the Mamasapano clash, saying the police counterterrorism operation would have had a different outcome had the ground commander followed his instructions to coordinate with the military.

Aquino gave a more detailed account of the operation before an audience of evangelical church leaders, led by Bro. Eddie Villanueva, who prayed for the President’s political survival and rejected calls for his resignation over the Mamasapano debacle that cost the lives of 44 Special Action Force (SAF) commandos.

Facing his biggest political crisis over the deaths of the commandos, the President assailed critics he described as “attention seekers” for taking advantage of the public anger over Mamasapano.

He said he would continue pushing for peace in Mindanao, saying it would bring justice to “every Filipino” and the slain SAF troopers.

Speaking with more conviction and certainty since the Jan. 25 clash in Maguindanao province, the President put the blame squarely on the shoulders of Director Getulio Napeñas, the sacked SAF commander who, he said, “kept the operation to himself.”

“If I am at fault here, why should I take all the blame?” Aquino told members of Christian Leaders Coalition, which claims to represent around 3 million members nationwide.

But while he discussed the Mamasapano operation at length, the President did not say why he involved then suspended Philippine National Police Director General Alan Purisima.

“The truth is I was given the wrong information by the people who knew most of what was happening and, unfortunately, those who didn’t know anything couldn’t give me any further information rather than very raw information,” he said, apparently referring to Napeñas.

Aquino, the Commander in Chief, admitted he was communicating with Napeñas through Purisima, who was ordered suspended for six months by the Ombudsman over allegations of graft.

“Napeñas had a lot of wishful thinking as opposed to reality. It’s clear to me that he fooled me. There’s a saying, ‘Fool me once, shame on you. Fool me twice, shame on me.’ I have no intention to be fooled twice,” Aquino said.

Villanueva, whose son Joel sits in Aquino’s Cabinet, said he had been approached by groups seeking to oust the President and form a transition government, but he rejected their offer.

“Even granting for the sake of argument that there were mistakes committed by the PNP SAF in fulfilling their noble duty in arresting a foreign terrorist … that along the way they committed mistakes,” Villanueva said, “is that a ground to demand the resignation of the [duly elected] President of the nation?”

Aquino recalled the Jan. 9 briefing on “Oplan Exodus” he received from Napeñas, a plan he described as “very thorough,” complete with a PowerPoint presentation and details on the phases of the moon to maximize the use of night vision equipment.

The President claimed he instructed Napeñas to “coordinate” with the military “several days” before the operation for fear of a “free-for-all,” meaning armed rebels in the area might join forces and gang up on the SAF troopers.

But though he had been assured of coordination, Aquino said Napeñas “went solo.”

“It now appears that he didn’t have any intention to [obey] my order to coordinate,” the President said. “If I knew that he would do this from the start, I would have said no to this mission.”

“What could have been a successful mission became ‘Mission Impossible,’” he added.

Aquino said he felt “no sense of urgency” from Napeñas, going by text messages he had received from Purisima on the morning of Jan. 25.

He said one message informed him that “extraction” for the SAF troopers was “ongoing.”

“When I arrived in Zamboanga City (to check on the aftermath of the previous day’s bombing), that’s when it became clear that no one else knew [about the operation], that there was no coordination,” he said.

Aquino said it was only later in the afternoon that he was told that not one, but two SAF units (the 84th Seaborne and the 55th Special Action Company) were the subjects of extraction.

He said Napeñas “hid” the operation from the military despite his order for coordination.

And with the Mamasapano debacle, the President warned the PNP to “ensure there is justification for deviation” in future operations.

“Because if you fail to justify one degree of deviation, there would be no benefit of the doubt. That’s insubordination right away and you will be out and [appropriate charges will be filed against you],” he said.