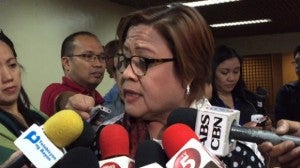 De Lima said she would ask them if they already had a report on the incident .

“I am going to personally relate to them our intention, what we are doing. I would appeal anew for their cooperation especially since they are claiming that there were also casualties from their end. We need more particulars,” de Lima said.

“If executive summary, let’s see how it will be useful. I want to know what their plans are and why (they are giving us) only an executive report,” she added.

De Lima said they would push through with the ocular inspection after they were advised by the military that it was already safe to go to Mamasapano.