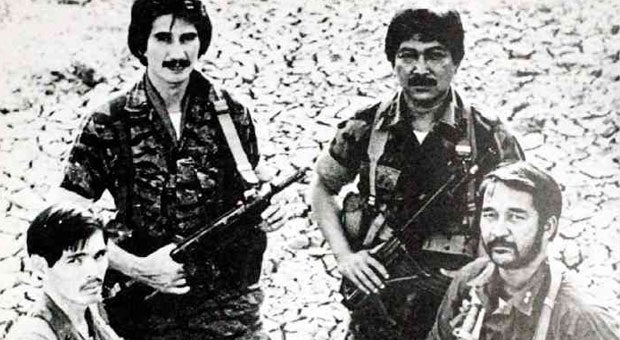 RAM boys Gringo Honasan, Eduardo Kapunan, Rey Rivera and Tito Legaspi PHOTO FROM “Breakaway: The Inside Story of the Four-Day Revolution in the Philippines”

(Editor’s Note: The authors, core founding members of the Reform the Armed Forces Movement [RAM], told the Inquirer that the following article “is based entirely on its three-part series highlighting the excerpts from Jose Almonte’s book, ‘Endless Journey: A Memoir.’

“We have not read the entire work. Other instances of untruthfulness, in other portions of his memoir, are not within our concern to ferret out. However, the examples given are sufficient to convince us that Almonte has published a dishonest and irresponsible book.”)

For starters, Jose Almonte was never a founder nor the father of the RAM. In the Feb. 22 issue of a major daily’s weekend magazine, Rex Robles wrote:

“The original RAM organizers ignored the limelight. None of them wanted to be identified. (Thus assorted charlatans would later claim to be ‘an original RAM organizer’ or, in one extreme case, a senior officer would enjoy the sobriquet, ‘father of the RAM.’ This would spawn inside jokes within the core group involving speculations as to who must be the mother.’

The great James Thurber once wrote in a preface to “My Life and Hard Times” how he found it easier to write about his distant past because the passage of time endowed events with a fuzzy quality that made them pleasant to remember.

How we wish this were true in the case of the recently released book of Almonte titled, “Endless Journey: A Memoir.” JoAl, as his friends are wont to call him, possesses an impressive intellect and a keen, perceptive mind, which he has applied to advantage in his long years as a soldier and, afterwards, as a high-level public servant. A kinder and gentler soul, one might even observe, would be hard to find.

Much to our regret, however, the book, which has received fulsome praise from many quarters, contains grave errors and even outright fabrications regarding important events in our history. With particular respect to his dealings with and role in the activities of the RAM, Almonte has flatly concocted events that never happened or, in the case of RAM’s relationship with the United States government, were directly in conflict with the reality at the time.

These invented accounts seem to serve no other purpose but to project Almonte as a key participant in certain critical periods of our country’s history. This is puzzling because, in our judgment, the regrettably false versions, if removed entirely from the book, would not have lessened its impact, if we are to judge from the lavish praise heaped upon it by many quarters, to include the press and the academe.

In refuting Almonte’s incorrect versions, we were reluctant to break confidences we have kept for decades in deference to the privacy of individuals who trusted us with acts committed at great personal risk. And even if the risk factor were minimized, we would continue to respect such privacy in the basic sense that one does not have to talk about every interaction one enters into on a personal level.

In the case of events involving the RAM and the US government, our connections were indeed direct with the Pentagon at the highest echelons but these could be misconstrued by ultranationalists who abhor contact of any sort with the Americans. Also, as may be gleaned from the Stanley Karnow book, “In Our Image,” the US wanted to portray themselves as having a bigger role in Edsa 1986. We wanted to avoid this impression because the military component of the event was truly a homegrown invention. Karnow’s book tries to give the US a bigger share of the Edsa glory.

In our dealings with the US, we were careful not to divulge important facets of our plans, even as Pentagon officials tried assiduously to win our confidence to the extent of offering protection against arrest provided we refrain from resorting to violent methods in pursuit of our goals.

That is why the message to Almonte by US Congressman Jack Kemp strikes us as thoroughly suspect, when he supposedly assured the RAM of US support “from bootstraps to combat planes”. This was dissonant to the advice we would regularly receive from Washington through the Pentagon’s East Asian Affairs and also directly from the Philippine desk itself handled by one Mary Tai (who visited the Philippines after Edsa ‘86 to interact with the RAM).

The reply by Honasan, as quoted in the book, that we were simply asking for “moral support” from the US government sounds artificial and asinine. During our talks with individuals and groups, RAM was consistent to ask only for understanding and acceptance. Honasan definitely does not remember the occasion described by Almonte and, at any rate, he was not in the habit of asking for “moral support” from anyone for the RAM intentions.

We have no use for US support in that sense. All through that period, we were careful not to draw the Americans closer than necessary and to give them too much information. And as we discovered later, they would embark on a subtle effort to make the international audience believe they had helped, and was cozy with us, from the very start. The timeline in the appendix to Stanley Karnow’s book “In Our Image” shows as much.

In early June of 1985, an emissary from the Pentagon, Col. William “Bill” White, arrived in Manila. He sought a private meeting with the RAM core group where he promised US government protection from arrest provided the RAM refrained from employing violent methods in pursuing its reformist goals. This message was reasserted in so many ways, through statements from the US Embassy and from the US Armed Forces attaches.

Almonte managed to join RAM some time in the third quarter of 1985, when almost all preparations were already completed and the plans for the move against the Palace had been finalized. The original intent was to move in October of that year, and then postponed to November. But because of the snap elections, the date was moved further back to late February l986.

Almonte’s earlier efforts to join RAM around mid-1985 were unsuccessful simply because the RAM was hard put how to make use of him, being much too senior and all. Eventually, he asked a PMA (Philippine Military Academy) classmate to endorse him through one of the core group members. Failing in this, he persuaded a skein of lady reporters (among them Marites Vitug), whose persistent efforts to endorse him were indulged by Juan Ponce Enrile.

As soon as he was accepted, he used his senior rank to wangle an occasional seat in the residual meetings of the tactical planning group (by that time, of course, tactical plans for the move against Marcos were already complete and members were simply ironing out small details).

(A word here on his coauthor, the formidable and highly esteemed Marites Vitug. Her sources within RAM are as impeccable as they are deep. Why she allowed Almonte to get away with his appalling claims without even the most elementary cross-checking is a profound mystery to the three of us. She is up there, among the very best. The lapse is simply inexplicable and, well, a great pity.)

Almonte would bring with him thick folders to these RAM meetings containing, to the consternation of the members, his proposals on who to appoint to what positions in the national government in case RAM was successful! (He was particularly interested in the post of National Intelligence Coordinating Agency chief.) The tactical group found that quite premature and presumptuous. They refused to table his untimely proposals.

He was wont to address the young members of the RAM then as “anak (my child)”. He particularly liked to address Honasan thusly, which may have given rise to his being regarded as father to his (RAM) “children”.

Almonte’s journey: ‘Passing on the baton’

Read Next
Iloilo town mayor convicted of graft
EDITORS' PICK
Seventh judge assigned to handle De Lima case
Beyond water service: Maynilad builds massive infrastructure projects to clean up Metro Manila waterways
Timeless Elegance in the Philippines’ Most Distinguished Home Kitchens
Museums ‘put to sleep,’ churches closed amid volcano’s unrest
PH preps for China virus: Question of when, not if
SM continues to send relief assistance to remote towns in Batangas
MOST READ
Lacson on Duterte’s threat to end VFA over Bato’s canceled visa: Where is the connection?
Part of Aurora Boulevard in Cubao closed from Jan. 25 – Feb. 1
No Bato visa, no VFA–Duterte
Corruption worsens: PH falls 14 notches to 113th spot in global index 2019
Don't miss out on the latest news and information.