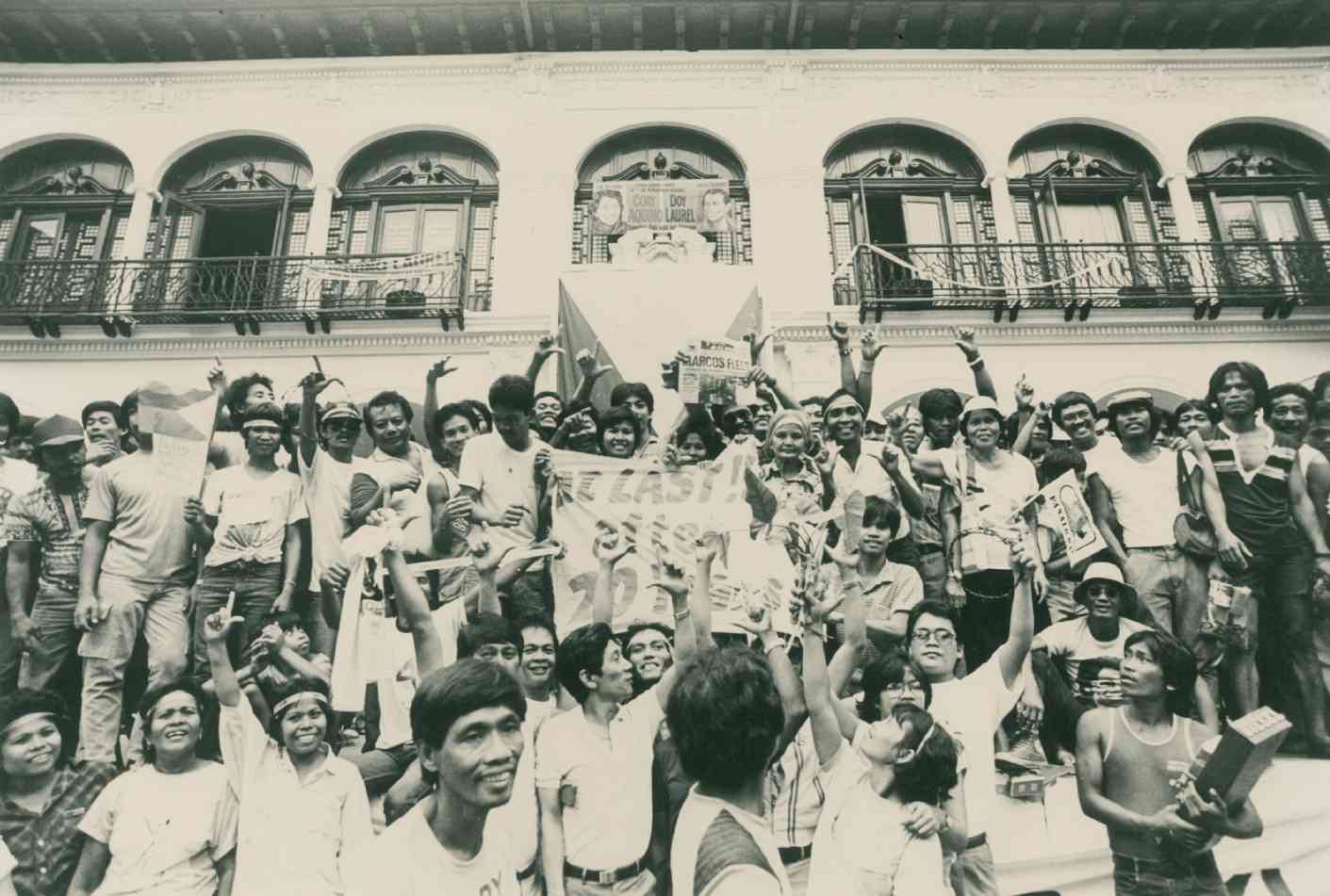 FREE, AT LAST! Flashing the “L” for “Laban!” (Fight!) sign, huge crowds gather at the Malacañang grounds on Feb. 26, 1986, after news broke that authoritarian President Ferdinand Marcos and his family had fled the country following four days of a People Power revolt at Edsa. The day marked the end of 14 years of martial rule in the Philippines. JOE GALVEZ/MR & MS

MANILA, Philippines–When the showdown came, we had a total of 770 men.

We were supposed to launch the coup at midnight of Saturday, Feb. 22. Gringo and his team would cross the Pasig on a boat and, in the heavy darkness, attack Malacañang. Red was in charge of neutralizing the presidential guards. Jake Malajacan, who was the battalion commander of a unit that will reinforce us in the Malacañang operation, was with Red.

Vic and I were supposed to operate the command center in Villamor Air Base, headquarters of the Air Force. We had a battalion from Trece Martires in Cavite that was going to occupy the Air Base. We rehearsed this, in a way. A couple of days before D-day, a few officers from Trece Martires cased the joint and brought pansit (a rice-noodle dish) for the guards and talked to them. They did not encounter any problems. They were confident and they resolved to bring pansit again—for the real action, this time with the entire battalion in tow.

For my part, the jump-off area was my quarters at Fort Bonifacio. A small group of officers was slated to meet there on that Saturday afternoon. There we would wait for developments before the crucial midnight hour. Once the action began, we were supposed to go to our respective assignments. Initially, we were to coordinate the movements of all the forces, and simultaneously, Sonny Razon was to pick up Ramos from Ayala Alabang and bring him to the command center. Once he was there, he would take over the operation. Everybody was going to be under his command. He didn’t know this. He would just be told as soon as he arrived.

On Friday, Feb. 21, there was a wedding reception in the Manila Hotel. The commanding general of the Air Force, Maj. Gen. Vicente Piccio Jr., was there; he stood as godfather. Other Air Force officers were there as well, all in a celebratory mood. They seemed to have no clue about the surprise that would befall them. Everything appeared to go well for us.

But between 3 and 4 o’clock in the afternoon, Vic called and said that we were compromised. The decision was for our group to come over to Camp Aguinaldo where we would declare our withdrawal of support from Marcos and hold out. Boy Turingan and I rushed to Camp Aguinaldo.

From then on, Enrile and Ramos called the shots. They made the decisions and played crucial roles: Ramos for military deployment, and Enrile for the political moves.

Gratifying moments helped ease the tension that gripped us during those days of uncertainty.

Retired Gen. Romeo Espino, the Armed Forces chief of staff during the Marcos years until 1981, was with us at the command center, which was Ramos’s office in Camp Crame. I noticed that for two or three days, all he did was sit on the same chair, as if he was glued to it. He rarely stood. Together with Gringo and Red, we approached him.

“Sir you have been sitting there for the last few days. If you need to go to the restroom, we will guard your chair.”

His answer surprised us: “If Marcos bombs this office and I am in the restroom, all of you will die and I will still be alive. Don’t you know that this is the best time for a soldier to die?”

On CNN, a reporter was interviewing a young Caucasian on the streets of New York. Maybe the guy was 16 years old. He was asked, “If you have the privilege to be born again, which country would you want it to be?”

“Philippines!” came his answer. I cannot forget that. A feeling of pride surged in my heart.

After Edsa I, the RAM officers asked me: “We won. What shall we do?”

I said, “Very simple. Let us fulfill our commitment. We go back to the barracks. We ask for no reward, no fame, no promotion, nothing.”

To Gringo, I said, “The best for you is to shave your moustache, cut your hair and wear an orange robe.”

But in the tumult that followed the first People Power revolution, my hope for Gringo was short-lived, like foam on the water.

(Editor’s Note: The above is excerpted from the memoirs of Gen. Jose T. Almonte, widely considered the “Father of the Reform the Armed Forces Movement” (RAM), as told to award-winning and much-respected journalist Marites Dañguilan-Vitug.

The narrative focuses on the key personalities and events leading up to the unprecedented four-day Edsa People Power Revolt that toppled the Marcos dictatorship without a single shot fired, without one participant killed.

The book, “Endless Journey: A Memoir,” will be launched Wednesday at the Kalayaan Hall of Club Filipino in Greenhills, San Juan City, at 3 p.m.)

PARTS I AND II

Transfer power to the people