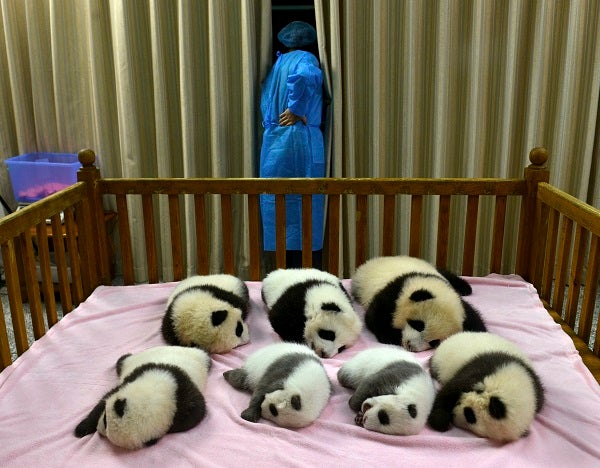 In this Oct. 30, 2012 file photo, a researcher stands near seven panda cubs, all born in 2012, at the Chengdu Panda Base in Chengdu, in southwestern China’s Sichuan province. The panda population has grown by 268 to a total of 1,864 since the last survey ending in 2003, according to a census by China’s State Forestry Administration. Nearly three quarters of the pandas lives in the southwestern province of Sichuan. AP

BEIJING, China – China’s population of wild giant pandas jumped nearly 17 percent over a decade — state media reported, citing an official survey — with conservation measures credited as being behind the increase.

The investigation by the State Forestry Administration (SFA) found that by the end of 2013 China had 1,864 giant pandas alive in the wild, marking an increase of 268 individuals, or 16.8 percent, the official Xinhua news agency reported Saturday.

The figures compared with a previous survey carried out in 2003, Xinhua said.

The SFA said conservation efforts led to the increase, according to Xinhua.

The report also said that as of June last year there were 42 pandas, including adults and cubs, overseas in 12 countries.

China has cultivated a global fascination with pandas into its diplomacy by sending the animals to overseas zoos where they have proven a wildly popular draw.

“The rise in the population of wild giant pandas is a victory for conservation and definitely one to celebrate,” Ginette Hemley, WWF senior vice president of wildlife conservation, said in a release.

“This increase in the population of wild giant pandas is a testament to the commitment made by the Chinese government for the last 30-plus years to wild panda conservation,” Hemley added.

Pandas, whose natural habitat lies in mountainous southwestern China, have a notoriously low reproductive rate and are under pressure from factors such as habitat loss.

Underscoring continuing worries, however, the SFC survey showed that 223 of the wild giant pandas, or 12 percent of the population, were classified as high risk, Xinhua said.