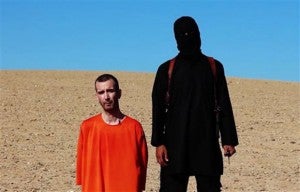 This image made from video posted on the Internet by Islamic State militants and provided by the SITE Intelligence Group, a U.S. terrorism watchdog, on Saturday, Sept. 13, 2014, purports to show British aid worker David Haines before he was beheaded. The video emerged hours after the family of Haines issued a public plea on Saturday urging his captors to contact them. AP

Mohammed Emwazi, named by media and experts as the militant thought to have beheaded at least five Western hostages held by the IS group, told the Mail on Sunday reporter that he felt like a “dead man walking”.

A British civil rights group that was in contact with Emwazi, Cage, claims that domestic spy agency MI5 had been tracking him since at least 2009, and blamed his radicalization on their “harassment”.

In an email to Mail on Sunday reporter Robert Verkaik, dated December 14, 2010, Emwazi described how he sold his laptop to someone he met online who he subsequently came to believe was with the security services.

“Sometimes I feel like I’m a dead man walking, not fearing they may kill me. Rather, fearing that one day, I’ll take as many pills as I can that I can sleep forever!! I just want to get away from these people!!!” Emwazi wrote.

Emwazi was born in Kuwait but moved to London when he was a child and attended school and university in the capital.

A spokeswoman for the Department for Education said Saturday that it had launched a review into how Quintin Kynaston school in north London dealt with radicalization “to see if there are any lessons we can learn”.

It was also reported that Emwazi had contacts with the men responsible for failed attacks on London’s public transport system in 2005, two weeks after suicide bombings killed 52 people in the capital.

All the revelations add to pressure on the security and intelligence agencies to explain why they did not act on their suspicions about Emwazi before he travelled to Syria.

Cameron on Friday defended their actions, saying they have to make “incredibly difficult judgements, and I think basically they make very good judgements”.