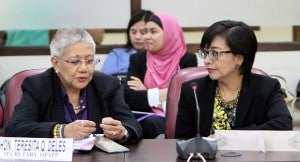 (The President has full confidence with the members of our peace panel, including Secretary Teresita Deles, who is the Presidential Adviser on the Peace Process, and Professor Miriam Coronel-Ferrer.)

He said both Deles and Ferrer have been able to perform their duty in accordance to President Benigno Aquino III’s directives.

Senate President Franklin Drilon, however, rejected such calls. He said the criticisms against Deles and Ferrer were “unwarranted.”