Psychologists to help Mamasapano villagers get over Jan. 25 clash 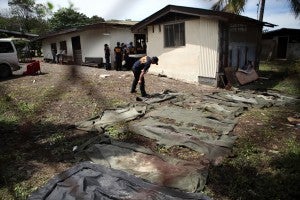 DAVAO CITY, Philippines – The Maguindanao provincial government has decided to tap experts from the Catholic-run Ateneo de Davao University for the conduct of psychological interventions for hundreds of residents of Mamasapano, Maguindanao, who were traumatized by the January 25 deadly clash between elite police forces and Moro combatants.

“They could never be as productive unless their fears and trauma were addressed,” Mangudadatu said, adding that residents always worried about more clashes that would uproot them from their villages and livelihood.

Mamasapano is a rice and corn producing area of Maguindanao.

Maguindanao budget officer Lynette Estandarte said the pool of experts from the Ateneo de Davao University had already been contracted to conduct a series of in-house trauma-healing sessions in Barangay Tukanalipao.

She said the session would start immediately after the team of experts had submitted the budget proposal for the sessions.

“The governor has assured a prompt approval in the wake of reports that several residents here have manifested sudden behavioral changes after the clash,” Estandarte said.

She said based on the plan, the sessions would be conducted separately for children, female and male adults.

“They will be segregated into three groups during the sessions to ensure wider latitude in their psychological recovery,” Estandarte said.

Mangudadatu said based on what he learned from Senior Insp. Regie Albellera, the Mamasapano town police chief, residents became restive whenever they saw uniformed men in their villages.

Mangudadatu said because of this, Abellera ordered his men not to wear their combat uniforms and just the blue police uniforms.

Mangudadatu, meanwhile, said the provincial government on Wednesday distributed cash assistance to families of civilians killed in the January 25 clash and to villagers who were injured.

He said a portion of the cash assistance distributed came from Sarangani Representative Manny Pacquiao.