Protesters converge on Edsa vs Aquino 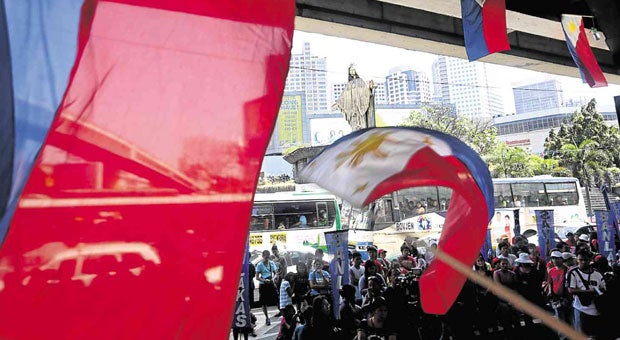 EDSA PROTEST Dissatisfied with President Aquino’s handling of the Mamasapano clash that resulted in the deaths of 44 police commandos, militants call for his resignation as they join the proreform Edsa 2.22.15 movement in a rally in front of the Edsa Shrine. MARIANNE BERMUDEZ

“This is the only Aquino who is afraid of people power… what is he afraid of?”

Former Tarlac Gov. Margarita “Tingting” Cojuangco was referring to her nephew, President Benigno Aquino III, who was the object of protest rallies staged in commemoration of the first day of the 1986 Edsa People Power uprising on Sunday.

Her husband, former Tarlac Rep. Jose “Peping” Cojuangco Jr., described as an “overkill” the way policemen barred them from joining groups calling for the resignation of the President outside the Shrine of Mary, Queen of Peace at the intersection of Ortigas Avenue and Edsa in Mandaluyong City.

The Cojuangcos had just attended Mass at the Edsa Shrine and were about to join a rally demanding the resignation of their nephew but a police barricade outside the chapel prevented them from crossing that side of the shrine.

The couple did not publicly call for their nephew to step down but they made it clear they were unhappy with the way he has been managing the affairs of the country, including the Jan. 25 police operation in Mamasapano, Maguindanao, that targeted two known terrorists and ended with the killing of 44 commandos.

Instead of supporting resignation calls, Peping Cojuangco made it clear he believed President Aquino could still implement reforms and suggested that he form a shadow Cabinet to help him achieve these.

Cojuangco and other members of the Council on Philippine Affairs (Copa) have been talking to groups demanding the ouster of President Aquino or rallying for reforms in government.

According to Copa secretary general Pastor Saycon, the group which he calls “veterans of Edsa,” along with other groups, will make an announcement in the next 10 days regarding its petition to the President.

The groups will have several activities until Feb. 25, the 29th anniversary of the Edsa uprising, Saycon said.

During the 11 a.m. Mass at the Edsa Shrine on Sunday, Cojuangco and other members of Copa wore T-shirts bearing the image of Aquino’s parents—the late President Corazon Aquino and martyred Sen. Benigno “Ninoy” Aquino Jr.—covering their faces. Emblazoned on the T-shirts were the words, “Anak, bakit ka nagkaganyan (Son, what happened to you)?”

Present during the Mass were former Sen. Francisco Tatad and former National Security Adviser Norberto Gonzalez, who are both part of the National Transformation Council, which is calling for the resignation of President Aquino and other officials and the creation of a transition council.

Joining the call for President Aquino to step down were about 1,000 members of various associations and nongovernment organizations, who joined a caravan that went around Metro Manila on Sunday.

Gathering early in the morning at the corner of Paseo de Roxas and Ayala Avenue in Makati, members of the Movement Against (Political) Dynasty (MAD), Citizens’ Crime Watch (CCW) and August 26 People’s Coalition came in their cars and motorcycles and wore red T-shirts signifying their “fervor for good governance.”

“This movement is part of the 2.22.15 Coalition and we condole with those calling for the resignation of the President because we believe he is no longer capable of running this government,” MAD founding chair Quintin San Diego told the Inquirer.

He said the groups were purely for change and transition in the government. “We do not want any politicians being seen with us because we do not support any of them. We are for the people,” he added.

Where are you, President Aquino