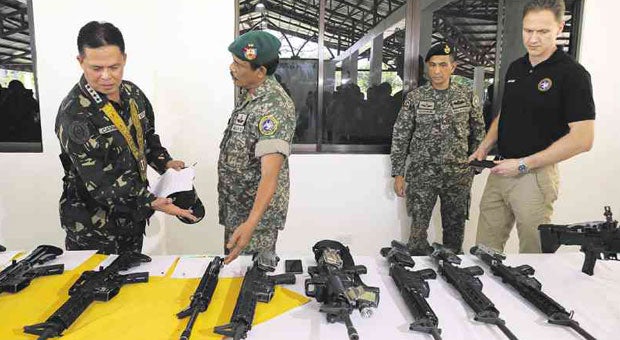 “It took five Presidents and 17 years to talk peace and we cannot afford that the Mamasapano incident would let it down,”he said.

Iqbal also said the MILF’s returning the slain commandos’ firearms should not be misinterpreted.

“It was to return and not surrender these firearms that were in our possession to put the public connotation in proper perspective,” he said.

Looking for other firearms

“Our efforts are not over with the turnover of the 16 firearms. We are trying to find out if there are still others remaining in the hands of our members,” Iqbal added.

For the sake of peace

“This is for the sake of the peace process in Mindanao. We already tested the pathway of war. The issue that we are confronting now in relation to the firearms is not to justify our position (on the Mamasapano incident) but of full partnership,” Iqbal said.

“We saw that the way going to war is not good. All of us suffer. What we need now is to go on the road leading to peace,” he added.

“We provided security to them in going to Madia. The mission was just quick. They pulled out of the area around 6:35 p.m.,” the source said.

Catapang said he would personally hand over the firearms to PNP headquarters in Camp Crame, Quezon City.

“I would like to thank Iqbal for indeed going the extra mile. For doing these things with us to jump-start our peace talks in Mindanao,” Catapang said.

Ferrer repeated her earlier statement that the Mamasapano incident was not a reason to go to war.

Iqbal said the Mamasapano incident should be treated with objectivity.

“I appeal to the media to be objective—not to take sides and be fair. I hope they will project that peace is better than war in Mindanao,” he said.

BIFF not doing the same

The BIFF said it would not hand in the firearms taken by its fighters from the slain policemen.

“We have no plans of returning the firearms. Why should we?”Abu Misri Mama, BIFF spokesman, said.

He said the firearms would be given to new members or old fighters who had no weapons.

Iqbal also said the gains of the peace process should not be wasted because of the Mamasapano incident.

The PNP urged people who may have bought the missing firearms and other personal belongings of the slain commandos to return them or they would be prosecuted.

Chief Supt. Generoso Cerbo Jr. told reporters on Wednesday that the PNP had made an inventory of the firearms, safety equipment and personal belongings lost in the Mamasapano clash.

Cerbo reiterated the PNP’s warning to people who would be found to be keeping the slain commandos’ equipment, reminding the public that private citizens are not allowed to own high-powered firearms.

“It was partly a response to the President’s appeal that they show concrete proof that they can still be trusted as the government’s partner in the peace process,” he said, referring to the MILF’s handing in the 16 rifles.–With reports from Marlon Ramos, Christian V. Esguerra and wires