Roxas: Who was on top of SAF dangerous mission? 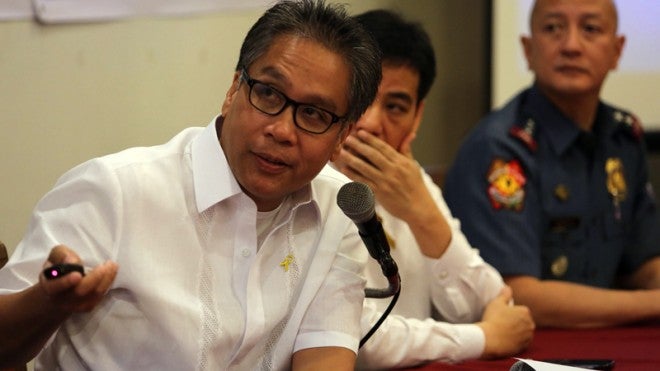 With the suspended Philippine National Police chief having no power and his replacement out of the loop, who had the responsibility of looking after the commandos sent on a dangerous mission to arrest two terrorists?

Also, coordination with other offices could have strengthened the operation, by giving the Special Action Force (SAF) troopers access to more equipment that could have helped them.

Interior Secretary Mar Roxas said these were the things he would focus on if he would recommend reforms following the bloody end to a SAF operation to arrest Malaysian terrorist Zulkifli bin Hir, alias “Marwan,” and his Filipino deputy, Abdul Basit Usman.

Roxas also said that had he been informed about the plan—he and Deputy Director Leonardo Espina, the PNP officer in charge, were kept out of the loop—there would have been no problem about coordination with Defense Secretary Voltaire Gazmin.

He said he and Gazmin had worked well and closely with each other on numerous occasions, including the siege of Zamboanga City by rebel forces and the onslaught of a supertyphoon in Leyte province a year ago.

He acknowledged that it was easy to be a “Monday morning quarterback,” or to offer expert opinion in hindsight.

“But I know that in sensitive, complicated and important tasks, I coordinate well with Sec. Volts [Gazmin],” he said.

Roxas also noted that the sacked SAF commander, Director Getulio Napeñas, had been reporting to suspended PNP Director General Alan Purisima about the Mamasapano mission before Purisima was suspended in December for alleged corruption.

During that time Purisima may have been secure in the fact that he could mobilize the PNP, he said.

But Purisima, who resigned last week, himself admitted that he no longer had any authority after he was suspended. Thus, he did not have the power to mobilize the PNP or coordinate with his counterparts in other agencies.

Thus, Roxas wanted to know who then was responsible for the SAF operatives.

“So who now had the power to look after the welfare of these commandos who we sent on a dangerous mission?” he said.

He also said he wanted to focus on coordination in the higher ranks, and crosswise.

“What could the PNP organization do if the head of the PNP at that time did not know of his big operation?” he said.

He pointed out that the PNP, even with the highly trained SAF, did not have any air assets, armor, artillery, or mortar.

“The triumph of a sensitive, complicated and dangerous operation rests on the availability of other resources that we do not have,” he said.