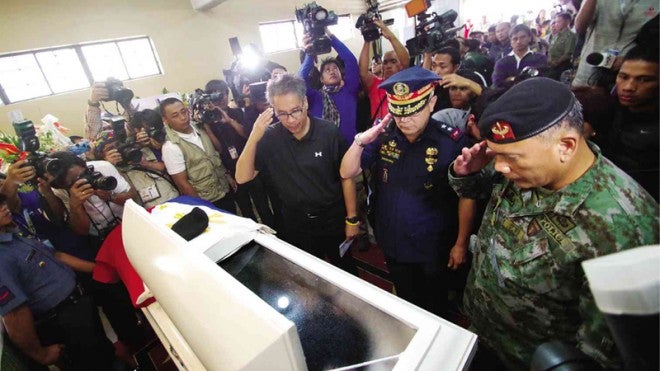 FINAL FAREWELL TO BRAVE TROOPERS Interior Secretary Mar Roxas, Chief Supt. Carmelo Valmoria and Chief Supt. Noli Taliño, acting director of the Special Action Force, salute the late PO2 Peterson Carap at his wake in the Church of the Resurrection in Baguio City. Carap was one of the 44 police commandos killed in Maguindanao province in clashes with Moro rebels on Jan. 25. RICHARD BALONGLONG/INQUIRER NORTHERN LUZON

BAGUIO CITY, Philippines—Interior Secretary Mar Roxas went to Benguet province on Monday to pay his respects to some of the 44 slain Special Action Force (SAF) commandos from this region, but did not have what the families of the victims expected from him: Answers.

“What went wrong?” Janet Bolinget-Carap, widow of PO2 Peterson Carap, asked Roxas at the policeman’s wake at the Church of the Resurrection.

Janet said she had a telephone conversation with her husband on Jan. 25, the day he and his fellow SAF commandos were slaughtered by Moro rebels in Mamasapano town in Maguindanao province while on a mission to arrest two terrorists.

She told Roxas she could not understand how her husband and his team could survive two months with little food and water during training, and then “in a one-day mission, they all died.”

Roxas offered her a familiar refrain: “This is why we have this board of inquiry to find out what really happened.”

Janet said Roxas left her disappointed. “I appreciate that a government official came to my husband’s wake. But if there is no explanation, I am not content,” she told the Inquirer.

Roxas was scheduled to meet the families of four slain SAF members here, and had just arrived from Mankayan town to pay his respects to PO2 Noble Kiangan, when he spoke to Janet. He was to attend to the wakes of PO2 Walner Danao and PO1 Angel Kodiamat.

Roxas was not able to visit the wake of PO2 Jerry Kayob in the Benguet capital town of La Trinidad because the policeman was buried earlier Monday.

Government sources said many of the relatives whom Roxas met during these visits asked the same question: “How did the mission fail?”

The answers are important because for the families of the fallen commandos these will bring closure to a sad chapter in their lives, said Janet.

She said Carap spent the Christmas holiday in Baguio City before he left for the Maguindanao mission.

At 11:30 a.m. on Jan. 25, Janet said, Carap called her to assure her he was safe and his team was awaiting reinforcement. “He said, ‘We’re all right. We have two casualties. Pray for our safety,’” she recounted.

Janet said her husband had found safe ground, but he chose to shoot it out to protect his companions.

“It is painful to know that he could have chosen to stay where he was and be safe. But his action only shows his character. He really is somebody who will not just stay still, he always offers a helping hand to anyone in need if he can,” she said.

Janet said she told Roxas, “The only consolation I have is he died with dignity.”

But when Roxas informed her she would need to be patient until the probe is completed, she said: “It might take too long and that’s agony for us. While we wait for explanations, we will continue to speculate.”

Roxas told Carap’s widow that the government was processing the benefits due all families of the slain SAF personnel.

“Is this all? Is this what we get in exchange for the lives of the policemen?” Janet asked Roxas. She apologized for the outburst, but told Roxas her family needed answers more than the benefits. “We can work and have money,” she said she told him.

Roxas replied that the government’s compensation package was not intended to make up for her husband’s martyrdom.

There were moments when Roxas and Janet sat in uncomfortable silence, while watching Carap’s 4-year-old son play. The boy, Arajil Frank, wore a cap which had the label, “This is my best day ever.”

Saying the media had asked her about the tragedy’s impact on the proposed Bangsamoro region, she said: “Why do we need to court the Moro rebels? Why should the government give way to them? Shouldn’t that be the other way around?”

In San Nicolas, Pangasinan, the father of slain PO2 Ephraim Mejia said he wanted to ask Roxas for a Medal of Valor for his son and the 43 other SAF members.

Warlito Mejia, 70, said President Aquino “gave us a plaque and a medal of bravery [but] my son gave his life.”

In Lucena City, more than 60 members of Alpha Phi Omega fraternity and groups of student activists staged a solidarity walk and lit candles on Sunday to dramatize their demand for justice for the death of the commandos.

“We sympathize with the families of all the victims of the unfortunate incident in Mamasapano,” said Gov. Mujiv Hataman of the Autonomous Region in Muslim Mindanao during the flag ceremony at the ARMM executive building in Cotabato City yesterday.

“Let us not stop supporting the peace process because of the Mamasapano incident. Let’s help preserve the gains of the Mindanao peace process. It is better for all of us that the Mindanao issue is resolved through diplomatic and politically accepted means and not through violence,” he said.–With reports from Kimberlie Quitasol, Vincent Cabreza, Richard Balonglong and Gabriel Cardinoza, Inquirer Northern Luzon, Delfin T. Mallari Jr., Inquirer Southern Luzon, and Edwin Fernandez and Charlie C. Señase, Inquirer Mindanao