Mamasapano clash: What happened according to the military | Inquirer News
Close
menu
search

Mamasapano clash: What happened according to the military 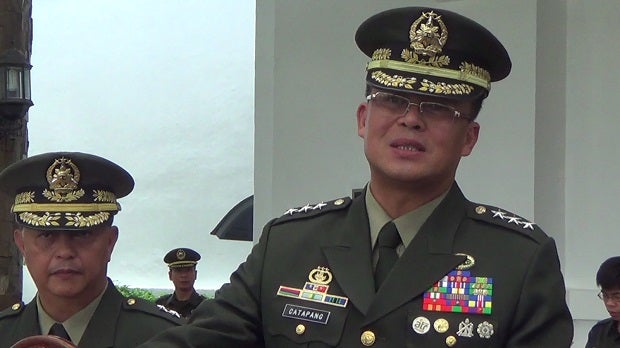 This is the account of the Armed Forces of the Philippines of the Jan. 25 operation carried out by the Special Action Force (SAF) of the Philippine National Police in Maguindanao province to take down international terrorist Zulkifli bin Hir, alias “Marwan,” and his Filipino aide Abdul Basit Usman.

The facts cited here are in the military investigation report of the fact-finding body as narrated to the Inquirer by a top military source. Gen. Gregorio Pio Catapang, AFP chief of staff, who ordered an investigation into the allegation of Police Director Getulio Napeñas, the sacked SAF commander, that no Army reinforcement came, resulting in the killing of 44 SAF commandos, has forwarded the report to Defense Secretary Voltaire Gazmin, who will submit it to President Benigno Aquino III.

11 p.m.—392 SAF commandos are stopped at a checkpoint manned by soldiers from the 45th Infantry Battalion (45th IB). “We’re cops, we have a mission,” the commandos say when asked to identify themselves. Two SAF groups go into the marshland, the 84th SAF Company headed by Supt. Raymond Train and tasked to get Marwan and the 55th SAF Company headed by Insp. Ryan Pabalinas, serving as the blocking force.

5 a.m.— Napeñas sends a text message to Maj. Gen. Eduardo Pangilinan, commander of the Army’s 6th Infantry Division, informing him of an ongoing police operation against Marwan. Napeñas does not ask for reinforcements.

6 a.m. —The Alpha Company of the Army’s 45th IB hears gunfire about 4 kilometers away from the detachment. The 45th IB informs the brigade. Napeñas sends a text message to “chief PNP” (presumed to be suspended Director General Alan Purisima) cc: Pangilinan informing them of the encounter. Napeñas does not request reinforcements.

8:45 a.m.—Army reinforcement team sees the remaining 300 plus SAF commandos who have not entered the marshland scattered in the street. “Just sitting,” according to the Army report. Army reinforcement team talks to two SAF commanders on the ground—Supt. Hendrix Mangaldan and a certain Supt. Mangahas—to ask for the grid coordinates of the Train and Pabalinas teams. Neither officers know the coordinates. The Army reinforcements proceed into the marshland. The SAF commandos refuse to go with them. The 45th IB receives a call from a member of Train’s group, saying: “Hill, we’re on the hill in Barangay Tukanalipao. We are surrounded by the MILF. We have eight dead, three wounded and one missing. We cannot get out.” The Army soldiers figure out the commandos location and proceeds to extract them.

9:20 a.m.—Troops from the 23rd and 14th Mechanized Brigades and the 62nd Division Reconnaisance Company link up with the 45th SAC commandos in Tukanalipao.

Between 11 a.m. and 1 p.m.—Army reinforcement team in the marshland receives sniper fire. Army engages the guerrillas.

2:30 p.m.—Joint Army and SAF forces set up a tactical command post to coordinate communications as there is no contact with SAF units in the marshland.

3 p.m.—Army artillery support tries to enter the marshland but fails due to narrow passages. Army’s V150 tank is hit.

7 p.m.—Soldiers retrieve the bodies of the SAF casualties. They radio the battalion to inform the 300 SAF commandos that everything is clear. SAF finally moves and helps the Army in retrieval operations.

8 p.m.—Soldiers locate Train and remaining members of his team and extract them safely.

3 a.m.—Altercation between Napeñas and Pangilinan. Napeñas wants to resume the operation later as it is already 3 a.m. Pangilinan furious and tells Napeñas, “Goddamit, those are your people but you are pressing me to get them for you.”

2 p.m.—PO2 Christopher Robert Lalan, the SAF survivor from Train’s team, is located by soldiers and taken to Army 45th IB headquarters to rejoin other SAF commandos. An angry Lalan kicks one of his comrades, demanding to know why reinforcements never came to support the two SAF groups that went in for the operation as planned.

Why the military did not reinforce SAF