Mamasapano clash: What happened according to President Aquino 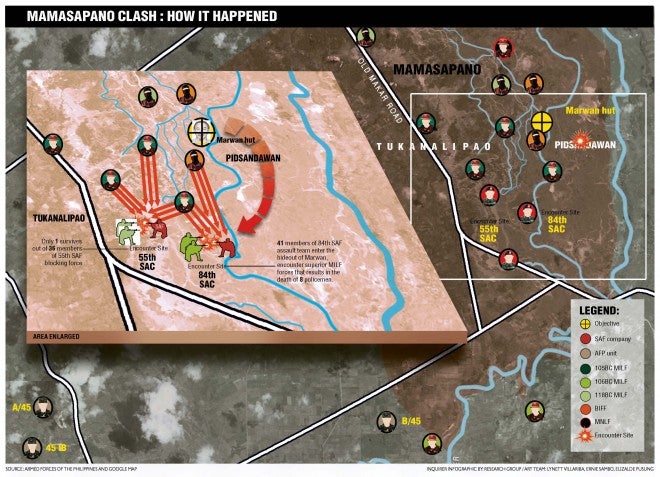 2002—Usman is accused in a bombing incident in General Santos City that killed 15 people and injured 60 others.

2006—Marwan, along with Ameril Umra Kato, leads a plot to assassinate then Maguindanao Gov. Andal Ampatuan Sr. in a bomb attack.

2012—Two people die in Cagayan de Oro City when Marwan attempts to replicate his bombings of two nightclubs in Bali, Indonesia, that killed 202 people. The first bomb goes off but a second bomb, discovered on time, does not explode.

May 2014—Philippine National Police Director General Alan Purisima reports to President Aquino on the operation to get Marwan and Usman after the PNP obtains “actionable intelligence” on the targets.

“I was talking directly to the ‘SAF (Special Action Force)’ director if at all … he (Purisima) was involved up to the point in time directly (after) he was suspended by the Ombudsman. After that, if at all, and because he was very knowledgeable about the whole thing, he was just explaining to me the intricacies of the plan involved,” Mr. Aquino says.

Third or fourth quarter, 2014—SAF attempts to arrest Marwan and Usman but halts operations after harassment attack on a detachment of the Armed Forces of the Philippines and exchange of fire with the Bangsamoro Islamic Freedom Fighters (BIFF).

Jan. 24, 2015—Members of the SAF head to Tukanalipao village in Mamasapano town, Maguindanao province, to serve outstanding arrest warrants on Marwan and Usman.

Jan. 28—President Aquino addresses the nation, declaring a national day of mourning on Jan. 30 for the 44 police commandos killed in the Mamasapano operation.

“These agencies (AFP, PNP and National Bureau of Investigation) are not always required to obtain my approval for each and every one of their operations, because it would be impractical for them to wait for my clearance before proceeding,” Mr. Aquino says, referring to questions as to whether he gave the go-signal for the operation. Inquirer Research

Aquino on SAF mission: No need for my go signal