AFP chief: Aquino did not break chain of command; we failed to coordinate | Inquirer News

AFP chief: Aquino did not break chain of command; we failed to coordinate 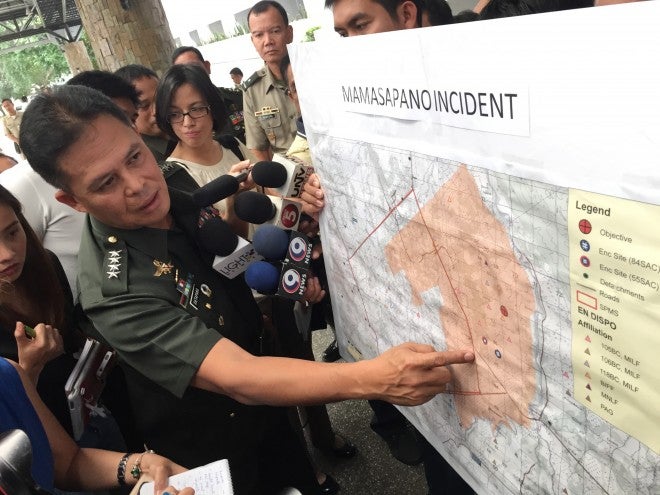 “I don’t think so because you know we were ordered by the President to coordinate and I think we failed in that order to coordinate,” he said at a press briefing at Camp Aguinaldo on Wednesday.

Catapang said they were aware of the plans against top terrorist Marwan as early as November 2014 but was not informed of the actual date.

“Unfortunately, there was no outcome of the meeting because I was told by General Guerrero that General Napeñas did not discuss the coordination. There was no coordination inasmuch as the intelligence chief was not around to discuss the concept of operations,” Catapang said.

On Jan. 25, members of the SAF were supposed to serve warrant to Jemaah Islamiyah leader Zulkifli bin Hir alias Marwan and Filipino bomber Basit Usman. Circulating reports said Marwan was killed in the clash but that was subject to DNA testing.

The police troops figured in an hours-long firefight with Bangsamoro Islamic Freedom Fighters and the Moro Islamic Liberation Front.

The military was heavily criticized for supposedly not being able to respond immediately to the request of reinforcements.

Coordination could have changed things in the botched operations, Catapang said.

“What they did was law enforcement operations, they can just come in and be able to exfiltrate but unfortunately their plan to exfiltrate before being seen by the various forces here failed, so I think that’s the price we have to pay for not having a well-coordinated plan on how to support them,” he said.