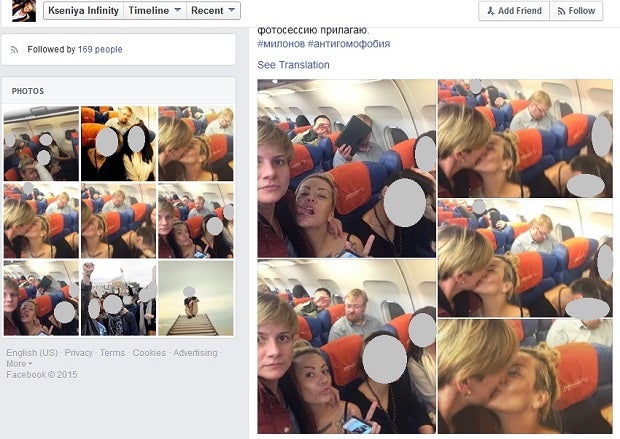 Russian lawmaker Vitaly Milonov criticized the Facebook post of a certain Kseniya Infinity which purportedly shows two ‘lesbians’ kissing with him in the background. Milonov (in white shirt and glasses) is a known supporter of anti-gay legislation in Russia. The photo has gone viral on social media. FACEBOOK SCREENGRAB

SAINT PETERSBURG, Russia – A Russian lawmaker who has strongly backed anti-gay legislation said on Tuesday all homosexuals were “mentally ill” after two lesbians snapped themselves kissing on a plane with him sitting in the background.

Vitaly Milonov also railed at the “stupidity” of the women in the picture, which showed him reading in the row behind as the women kiss in front of him.

The picture has gone viral after one of the women, who calls herself Kseniya Infinity, posted it on her social networking pages.

“The lesbians went through with this photo session due to their stupidity,” Milonov told AFP. “It shows that all LGBT people are mentally ill. They have overdosed on so-called European values.”

Milonov vowed to retaliate, saying: “They should have to do a photo session in a police station.”

Milonov said he would retaliate by investigating the club.

“I didn’t know anything about the club they organised. Now I will get to work on it,” Milonov said.

Milonov, who sits in the regional parliament of Saint Petersburg, introduced a law in the city banning “propaganda” of gay relationships to minors before a similar law was introduced Russia-wide in 2013, sparking international controversy.

He is known for his openly homophobic statements and has become a hate figure for gay rights supporters.

Kseniya Infinity wrote on the VKontakte networking site that the women spotted Milonov in the row behind them as they boarded a flight from Moscow to Saint Petersburg and decided to take the picture.

“Milonov himself didn’t say anything to us. We did a photo-session with him in the background. When he spotted us, he hid behind a tablet,” Kseniya wrote.

“We’re very happy. He probably isn’t, but who cares.”

PH ranks among most gay-friendly in the world