Lawmakers unite; to file bills for creation of truth commission

MANILA, Philippines — Members of the Senate and the House of Representatives came together on Monday to push for an “independent” and “credible” truth commission that would probe the killing of 44 members of the police Special Action Force (SAF) in Mamasapano, Maguindanao. 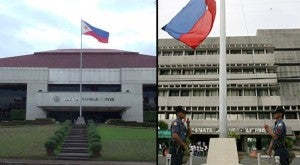 House of Representatives and Senate of the Philippines. INQUIRER.net and INQUIRER FILE PHOTOS

Seeking a commission’s formation, Senator Teofisto Guingona III, chair of the Senate blue ribbon committee, said he would file a bill in the Senate and Amin Representative Sitti Turabin-Hataman would file a counter part of the measure in the House this Monday.

Guingona, in a press conference, said an independent and credible commission would restore the public’s trust in government’s efforts to find out the truth behind the Mamasapano incident, which some have described as a massacre of the SAF members.

Senators Aquilino “Koko” Pimentel III and Paolo Benigno “Bam” Aquino III and two other congressmen threw their support behind the creation of a commission.