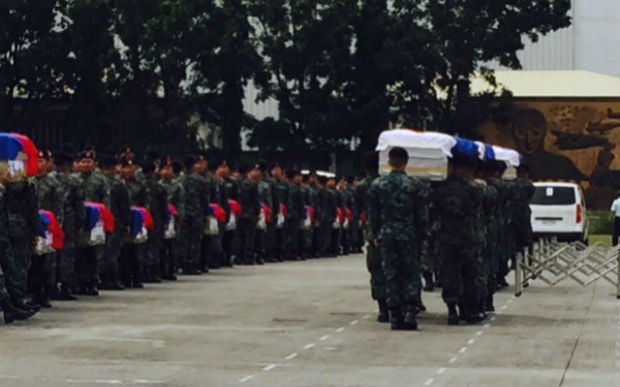 MANILA, Philippines – The Special Action Force (SAF) of the Philippine National Police is marking its 24th anniversary on Thursday, January 29, 2015, with mourning as it receives the bodies of 42 of its commandos who were killed in Maguindanao five days earlier.

Originally created on May 12, 1983, and called the Philippine Constabulary Special Action Force, the elite police unit is commemorating its integration into the PNP in 1991 when then-President Corazon Aquino signed Republic Act 6975.

On Sunday, January 25, 2015, nearly 400 members of the SAF were deployed to serve a warrant of arrest against known Jemaah Islamiyah terrorist Zulkifli Bin Hir, also known as “Marwan,” who was reportedly hiding in Mamasapano town in Maguindanao.

Today’s commemoration would have been a joyous one after relieved-SAF chief Director Getulio Napeñas said that his men captured Marwan.

Two Muslim SAF operatives were left in Mindanao while the bodies of 42 others arrived at the Villamor Air Base in Luzon on Thursday morning.

Bodies of 42 slain SAF men arrive at Villamor Air Base