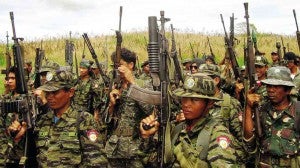 Information gathered by the Inquirer showed that police armed with a warrant of arrest and assisted by the MILF’s 118th Base Command were about to capture the suspect when men from Guma’s command arrived which led to the escape of the fugitive.

The 118th Base Command is under Ustadz Wahid Tondok.

In 2012, the 105th Base Command came to the rescue of one of the two parties in a standoff in Lamud, South Upi, Maguindanao. Guma’s men intervened upon learning that the other side, led by Hadji Mama Binangon, was supported by the Moro National Liberation Front (MNLF).

Guma’s unit was also recently embroiled in armed conflicts stemming from a clan feud in the boundaries of Lebak, Sultan Kudarat, and Upi, Maguindanao.

Last month, the group, combined with members of the Bangsamoro Islamic Freedom Movement (BIFM), stormed the town of Rajah Buayan, where the Army’s 45th Infantry Battalion was securing a highway concreting project.

The combined MILF-BIFM forces, respectively under Guma and Kagi Karialan, engaged the soldiers in a nightlong firefight in Rajah Buayan, sending hundreds of civilians, many of them women, fleeing.

Residents said the BIFM wanted to retaliate against the Army unit, which Karialan accused of raiding his house in nearby Kabalukan Hills, while nobody was there.

Guma’s men eventually settled for the vehicle of a relative of the commander, he said.

Jaafar said they “see no political and military gain in cooperating with the BIFF.”

But as far as the BIFF was concerned, there was no clear distinction between its forces and that of the 105th Base Command.

Abu Misri Mama, BIFF spokesperson, said members of both organizations were friends and relatives, and that no other identities prevailed.

“Except that we are all family,” he said.