Bodies of 42 SAF men arrive at Villamor Air Base 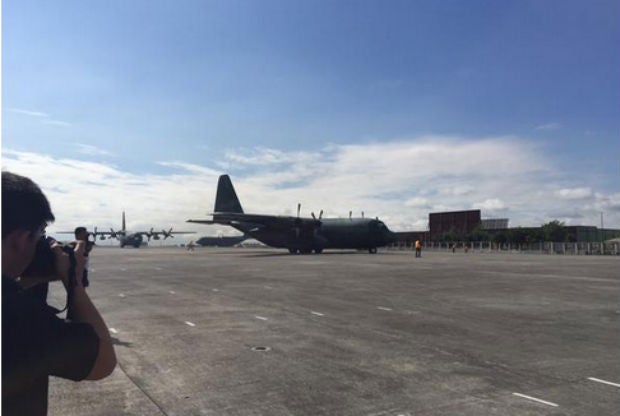 MANILA, Philippines—The caskets of 42 slain Special Action Forces members have been flown in to Manila as the Philippine National Police gives arrival honors to its men who died in a disastrous operation in Maguindanao.

From the a military base in Cotabato City, metal caskets of 42 policemen carried by three C-130 planes arrived at the Villamor Airbase in Pasay City on Thursday morning.

The PNP earlier said they are expecting President Benigno Aquino III to attend the ceremony for the dead. But no Aquino showed up at Villamor.

After the plane landed at 10:05 a.m., the caskets were taken out of the plane by their colleagues at the SAF.

From Villamor, the bodies will be brought to their headquarters at Camp Bagong Diwa in Taguig City, where a “vigil” will be held as tribute for the policemen.

Newly-appointed PNP spokesperson Chief Superintendent Generoso Cerbo Jr. told reporters that each of the families will be given financial support as well as transportation services on the funeral day of their fallen loved one.