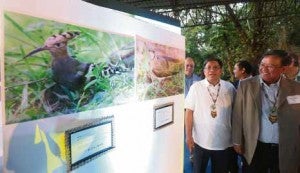 MANILA, Philippines–Seventeen animal species never before recorded in Mindoro were spotted on the island, with two of these never before documented in the entire country.

This was disclosed by the nonprofit environmental organization Mindoro Biodiversity Conservation Foundation Inc. (MBCFI), which documented the faunal species from 2011 to 2013 while doing biological surveys in the provinces of Oriental and Occidental Mindoro.

The reports on the expeditions and MBCFI’s other programs were handed over on Thursday to government officials and the foundation’s corporate and civil society partners in an official turnover ceremony at the Ninoy Aquino Parks and Wildlife Center in Quezon City.

“The species have been recorded before in other areas. But based on previous research conducted on Mindoro, they’ve never before been recorded on the [island],” MBCFI executive director Grace Diamante told the Inquirer.

“Perhaps the [species] had been there for a long time, but the resources [to conduct an inventory] just weren’t available until now,” Diamante said.

The foundation’s survey team was composed of bird enthusiasts and biologists, rangers of the Department of Environment and Natural Resources, representatives from the University of the Philippines-Los Baños Museum of Natural History and the Kansas University-Biodiversity Institute.

To document their findings, the team photographed and captured the animals through mist netting.

Conducting such an inventory is the first crucial step to preserve biodiversity in Mindoro, according to the MBCFI.

“We can’t do interventions without the survey,” Diamante said, noting that the study would be the “baseline” for a 10-year conservation plan.

Environment Assistant Secretary Marcial Amaro Jr. in a speech at the turnover said, “We now have this very important information. This will provide us with the status of resources that we are supposed to manage. We will now be able to readjust interventions to make sure these are covered in programs we carry out.”

The newly recorded species on Mindoro were 11 birds, two bats, three fishes and a snake. The MBCFI also documented a bat species recorded only once before on the island.

According to MBCFI, their recorded sighting in March 2013 of the Black Bulbul and the Asian Paradise Flycatcher a first in the Philippines, although the birds are commonly spotted in other parts of Asia.

On Mt. Siburan, also in Sablayan, the foundation recorded a Green-Faced Parrotfinch, a rare bird endemic to the Philippines and previously only found in Luzon and Negros.

The foundation also recorded a Mindoro Stripe-faced Fruitbat at the Mt. Calavite Wildlife Sanctuary in Paluan and Ilin Island in San Jose, Occidental Mindoro. While the bat species’ presence was not the known first on Mindoro island, it was only previously spotted on Mt. Siburan, when it was discovered in 2006.

The MBCFI said their reports attested to the importance of Mindoro “as one of the global biodiversity conservation priority areas, particularly in terms of the number of endemic species, diversity of habitat and degrees of threats.”

Read Next
INC builds 500 houses, farm, factories for storm victims
EDITORS' PICK
Look Through: The fate of impounded stray dogs
House energy committee chair Arroyo bats for cheap electricity
What to watch out for when selecting a video surveillance solution
23,000 cops to be deployed nationwide for school reopening
Unleash the photographer in you this World Photography Day with vivo smartphones
DOH says COVID-19 cases plateauing, but public shouldn’t be ‘complacent’
MOST READ
Korina Sanchez reunites with former ABS-CBN co-anchors Julius Babao, Cheryl Cosim
Sharon Cuneta asks for prayers for friend in ICU who suffered silent stroke
QC school’s shutdown violated rules – CHEd
Light therapy could be the answer to your sleep problems
Don't miss out on the latest news and information.