MANILA, Philippines — It was “a bittersweet moment” for the Philippine National Police (PNP) as it marked its 24th founding anniversary on Monday by citing its men who successfully secured Pope Francis while mourning the death of 30 lawmen slain in Mindanao on Sunday.

“Naghahalo ang tamis at pait sa kalooban ko,” said an emotional Interior Secretary Mar Roxas as he addressed the PNP’s officers and men in Camp Crame Monday morning. (My feelings are a mix of sweet and bitter.)

The PNP has received praise for the security provided by 28,000 policemen to the pope. On Sunday morning, however, members of its Special Action Force (SAF) were killed in a clash with rebels in the province of Maguindanao.

On Monday, a video surfaced on social media showing men in SAF uniforms, with wounds in their heads and severed limbs. 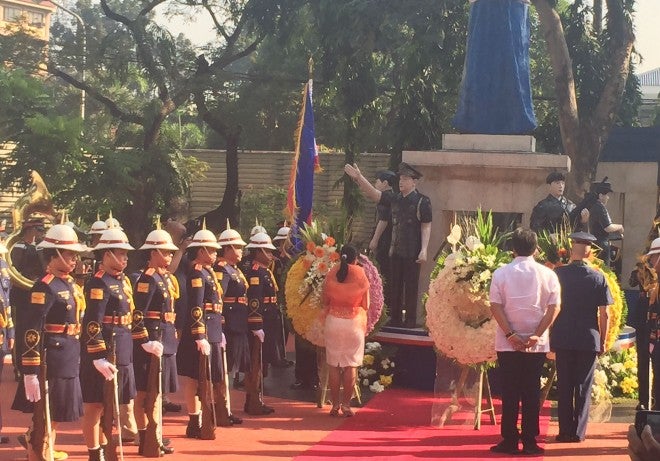 In Crame and in all PNP camps nationwide, Philippine Flags are at half mast, “signifying respect, admiration and acknowledgement to the ultimate sacrifice of (their) brethren.”

“Together with the flag raising, we sing Lupang Hinirang. Many times we sing the national anthem by memory. But today holds a special meaning particularly the last words ‘ang mamatay nang dahil sa ‘yo,” Roxas said.

Roxas, PNP officer-in-charge Deputy Director General Leonardo Espina, and Celia Laceda, wife of one of the slain policemen, led a wreath-laying ceremony in honor of the fallen lawmen, who were also given a three-volley salute.

Meanwhile, several officers were awarded with the Medalya ng Paglilingkod Sa Santo Papa for their outstanding service during the papal visit from January 15 to 19.

The Interior Secretary said the 28,000 policemen and women who secured the pope would receive a similar citation.