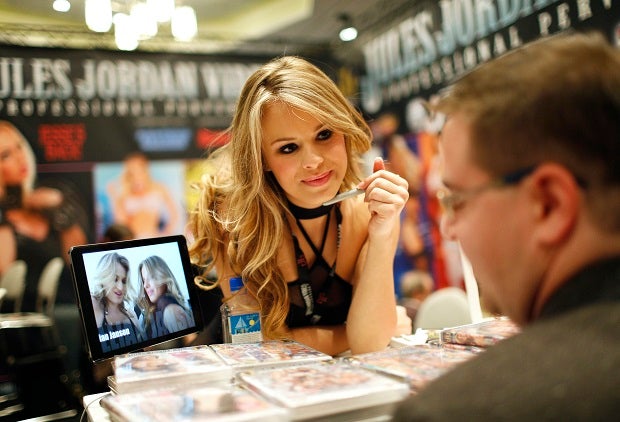 LAS VEGAS, United States — Adult film production migrated from California to Nevada after voters in Los Angeles County approved a law requiring condom use on set. Now, a condom use requirement could follow.

“The potential exists to require condoms and other barrier options in all sexual contact,” state Department of Health and Human Services spokeswoman Mary Woods said in a statement.

Condoms can cause friction, irritation or even infection during scenes that take hours to film before being edited, said Keiran Lee, a veteran male performer who lives in Los Angeles with his wife and children.

Woods, in the health department statement, said it could take up to two years to collect data and public comment about the Nevada proposals, and she called it too early to know the outcome of the process.

But for conference attendees enjoying a city synonymous with sin — and a state home to the only legalized prostitution in the U.S. — the idea of putting condoms on actors and categorizing adult entertainment production with brothels drew criticism.

“In a brothel, you’re talking about people coming in from outside,” she said. “We have performers on a closed set who go through a testing protocol.”

Duke said that since 2004, there have been no documented cases of HIV transmission during scenes between professional actors in the FSC database.

The two men involved in last year’s case weren’t in the FSC database, Duke said. Authorities have said it appeared likely one infected the other during an unprotected gay sex scene. Details haven’t been made public.

Actress Ariana Marie, 21, said she trusts the results. She said she’s been in scenes with and without condoms, and called it distracting to have her partner stop to take one off at the end.

Prostitution is legal in rural Nevada counties but not in Las Vegas and Reno. Nevada health officials say a strict testing regimen prevents transmission of sexually transmitted diseases and has never resulted in a documented case of HIV transmission in a brothel.

Nevada currently has no rules specifically covering pornography production. And no permit is needed to film on private property, a home or in a hotel room, according to the state film office.

That made Nevada attractive to West Coast adult film producers worried about losing fans following the adoption in Los Angeles of strict rules requiring condom use in adult film sex scenes filmed there.

After voters in Los Angeles County approved the condom requirement in 2012, the number of permits for adult films in Los Angeles dropped dramatically, from 485 in 2012 to 40 in 2013.

Meanwhile, the number of general permits for all film productions in Clark County, including Las Vegas, jumped more than 50 percent, from 226 in 2012 to 343 in 2013.

Although the foundation was a catalyst for passage of the Los Angeles law, Weinstein professed no desire to kill the adult film industry.