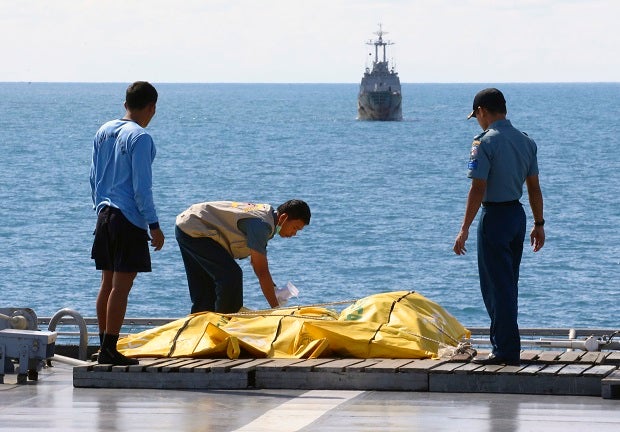 PANGKALAN BUN, Indonesia — Indonesian rescuers lifted the fuselage of the crashed AirAsia jetliner nearly to the water’s surface before it sank to the ocean floor again when the lifting balloons deflated Saturday, a setback in the effort to recover more of the victims’ remains.

Four bodies were discovered though around the area where dozens of divers were struggling with strong current and poor visibility to prepare to retrieve the 30-meter-long wreckage, said Suryadi Bambang Supriyadi, the operations chief at the National Search and Rescue Agency.

Divers reached the fuselage section for the first time on Friday and retrieved six bodies. A total of 69 bodies have now been recovered from AirAsia Flight 8501, which crashed Dec. 28 with 162 people on board while flying from Surabaya, Indonesia’s second largest city, to Singapore.

Authorities believe many of the other bodies are still inside the fuselage.

Supriyadi added that the cockpit was reported to be about 500 meters (yards) from the fuselage at a depth of 30 meters (100 feet) and the bodies of the pilot and co-pilot might be inside. “Divers would evacuate (them) if they are there,” he said.

Media reports said Saturday the fuselage was lifted to about 7 meters (23 feet) from the surface before some of the balloons failed.

Some passengers’ belongings such as biscuits, milk boxes, hair rollers and even an iPhone with an attached earphone, as well as aircraft parts such as seat cushions and tables, floated out as the fuselage was being lifted, the Detik.com website reported.

Bad weather is a suspected factor in the crash. Just before the flight disappeared, the pilots asked to climb to a higher altitude to avoid threatening clouds, but were denied permission by air traffic controllers because of heavy air traffic.

Investigators are analyzing data from the aircraft’s cockpit voice and flight data recorders with advisers from Airbus, the plane’s manufacturer.

Tatang Kurniadi, head of the National Transportation Safety Committee, has ruled out sabotage and said a preliminary report on the accident is expected to be submitted to the International Civil Aviation Organization next week.

A full analysis of what went wrong could take up to a year, Kurniadi said.