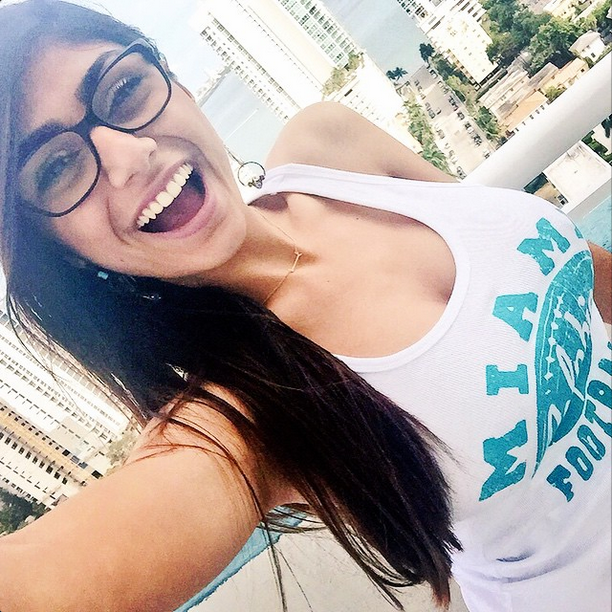 “You are unworthy. You are only a sex object,” posted one Facebook user, alongside an image of the half-naked Khalifa.

“You don’t represent Lebanon!” another commenter said on Twitter, where the buxom brunette actress has attracted more than 78,000 followers.

Others leapt to Khalifa’s defense, albeit with reservations.

“Mia Khalifa hasn’t harmed anyone. It’s her body,” said a post on the Lebanese blog Philaz. But “we are also free to say that what she is doing isn’t ‘liberalism’ but an attack on freedom.”

“You have to admire Mia Khalifa for her audacity,” wrote a Twitter user.

And standup comedian Nemer Abou Nassar tweeted: “Mia we love you! i hope to high five you soon one day.”

Although renowned for its nightlife, smoldering female pop stars and legal alcohol consumption unlike most other Arab states, parts of Lebanese society remain deeply conservative.

Last year, Lebanese Olympic skier Jackie Chamoun found herself at the center of a scandal after a video emerged of her taking part in a topless photo shoot, shocking many but also sparking online expressions of support.

Several photos posted online of Khalifa appear to show the actress sporting a tattoo on her left arm of a verse from the Lebanese national anthem.

“Lebanon has always been a pioneer among Arab countries,” a commentator said.

In a country more used to bad news, including a deteriorating security situation due to the conflict in neighboring Syria, viewers were greeted with images of Khalifa on national television bulletins.

“Mia Khalifa is the first Lebanese who publicly boasts of practicing such a profession,” said local news station Al-Jadeed.

Lebanon has struggled to deal with a mass influx of refugees from the war in Syria and 25 of its soldiers and police are being held captive by jihadists.

Several commentators even chose to play on the names of Khalifa (caliph in Arabic) and self-proclaimed caliph of the Islamic State jihadist group, Abu Bakr al-Baghdadi.

“Who do you prefer as caliph? Mia or Al-Baghdadi? I prefer Mia Khalifa!” said one Lebanese Twitter user.