Obama offers US help to purse terrorists in French attack 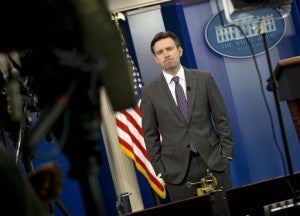 White House press secretary Josh Earnest waits to do a television interview with Fox News in the Brady Press Briefing Room of the White House in Washington, Wednesday, Jan. 7, 2015. President Barack Obama has condemn the shooting at the offices of Charlie Hebdo magazine in Paris that has reportedly killed 12 people. AP

WASHINGTON — President Barack Obama offered help to French officials to pursue terrorists responsible for what he is calling a “horrific shooting” at a satirical weekly newspaper.

In a statement, Obama offered thoughts and prayers for the people of France, which he called “America’s oldest ally.” He said France and Paris, where the attack occurred Wednesday, will endure beyond “the hateful vision of these killers.”

Masked gunmen stormed the office of the satirical weekly newspaper Charlie Hebdo, killing at least 12 people before escaping. It is France’s deadliest terror attack in at least two decades.

Charlie Hebdo has been repeatedly threatened for its caricatures of the Prophet Muhammad and other controversial sketches.

Press secretary Josh Earnest said that American have been in close contact to assist the French in the wake of the bloody attack on the Charlie Hebdo weekly.

Earnest called the French have been “stalwart allies” in the U.S. fight against Islamic State extremists, saying “We know they are not going to be cowed by this terrible act.”

“Our thoughts are with our allies over there in France right now,” he said. “I can tell you that we have worked closely with the French in efforts to degrade ISIL (Islamic State militants).”

Earnest also said Washington will work to protect Americans at home and abroad and said the United States has been “keenly aware of” the risk of attack from foreign fighters, people who are willing to “give their lives for their cause.”

The spokesman cautioned, however, that the attack Wednesday was still in the initial stages of investigation and said he didn’t want to get ahead of that.

“We’re at the very stages of what happened and who was responsible,” Earnest said. He said it is known that there are “strong ties” between the al Qaida terrorist network and the Islamic State extremists.

“We obviously are trying to monitor what we consider to be a very important threat,” he said.

“I think based on what we know now, that is what we are confronting here,” he said, when asked at one point if Washington considered the attack an act of terrorism.

“This is an attack on the basic freedoms of freedom of speech and freedom of the press,” Earnest said. He appeared in interviews on CNN and MSNBC.

12 dead in attack on Paris newspaper; France goes on alert