Sen. Miriam Defensor-Santiago has filed a bill that seeks perpetual disqualification of a convicted plunderer from public office.

In a bill she filed before the Supreme Court ruled that deposed President and convicted plunderer Joseph Estrada—who subsequently won election as mayor of Manila—was not disqualified to run for public office, Santiago said that the theft of P50 million by a public official was “unforgivably criminal”.

“And no person who is capable of such an act has a place in public office,” she said in Senate Bill 2568. 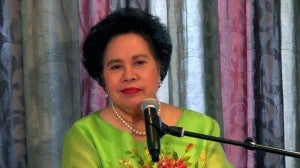 It should be “unthinkable” then for a public servant convicted of plunder by the courts “to be allowed to hold office once more,” said the senator, who pokes fun at the corrupt in her best-selling book, “Stupid is Forever.”

No venue to reform

“Public office is not the venue to test the limits of one’s ability to turn from his evil ways,” she said.

“Recent developments have shown however that it is possible, by some legal maneuverings, for one who has been convicted of the heinous crime of plunder to run and be reelected into office,” she added.

Santiago filed the bill on Jan. 13, a week before the high court justices, voting 11-3, junked a petition seeking to disqualify Estrada from running for mayor of Manila in the 2013 elections.

The petitioners, former Manila Mayor Alfredo Lim and his lawyer Alicia Risos-Vidal, had argued that Estrada’s conviction for plunder in 2007 disqualified him from running for public office.

But the 11 justices ruled that the grant of presidential pardon and his acceptance of it restored his civil and political rights, including standing as a candidate for mayor in 2013.

In a 2007 decision finding Estrada guilty of plunder, the Sandiganbayan ruled that he was the owner of the Jose Velarde account where he deposited billions of pesos in illegal gambling bribes. He was shown to have signed Jose Velarde to the bank documents.

The Santiago bill seeks to amend Republic Act 7080 which defines plunder as the accumulation of ill-gotten wealth by a public official through a series of overt criminal acts amounting to P50 million.

Specifically, she sought to amend Section 5 on suspension and loss of benefits, to read, “Any public officer against whom any criminal prosecution under a valid information under this Act, whatever stage of execution and mode of participation, is pending in court, shall be suspended from office.”

And to the provision that reads, “Should he be convicted by final judgment, he shall lose all retirement or gratuity benefits under any law,” Santiago sought to add, “and no pardon may extinguish the accessory penalty of perpetual penalty of perpetual absolute disqualification.”

Santiago said her proposed amendments would “make it impossible for one who has been convicted by final judgment of the crime of plunder to hold public office”.

“Public office is a public trust. It is no secret however, that despite the best efforts of honest citizens and public servants to curb the tide of corruption, this government remains astoundingly replete with public officials that are ready and willing to pocket money from the nation’s coffers,” she said.