Highlights of Obama’s State of the Union address 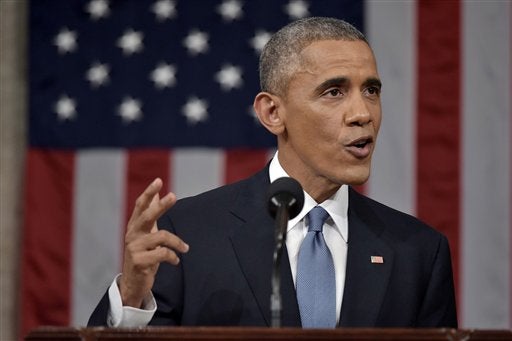 President Barack Obama delivers his State of the Union address to a joint session of Congress on Capitol Hill on Tuesday, Jan. 20, 2015, in Washington. AP PHOTO/MANDEL NGAN, POOL

WASHINGTON—US President Barack Obama called for higher taxes on wealthy Americans and new initiatives to boost the middle class as he urged Americans to turn the page on years of economic woes and hard-fought wars in his sixth State of the Union address before Congress. Some highlights from Obama’s proposals:

Tax hikes: Raise the top capital gains rate on couples with incomes above $500,000 to 28 percent, the rate under President Ronald Reagan. Impose a fee on roughly 100 massive financial firms with assets exceeding $50 billion. Eliminate a tax break on inheritances. The administration estimates these changes would generate $320 billion over a decade.

Tax breaks: Create a $500 tax credit for families where both spouses work and have an annual income up to $210,000. Expand the child care credit to up to $3,000 per child under age 5. Offer the Earned Income Tax Credit to childless workers and noncustodial parents. Consolidate six overlapping education tax breaks into two.

Education: Offer two years of free community or technical college. Students would need to go to school at least half-time, maintain a 2.5 grade point average and make progress toward a degree. The White House estimates that would cost $60 billion over a decade.

Paid leave: Call for federal and local laws allowing workers to earn up to a week of paid sick time a year. Urge Congress to give federal workers an additional six weeks of paid parental leave. Call for more than $2 billion from Congress for paid family and medical leave programs.

Home ownership: Cut insurance premiums for government-backed mortgages by half a percentage point to .85 percent. The White House says the reduction would save new home buyers and those who refinance $900 a year compared to current rates.

Middle East: Urge Congress to pass a new authorization for use of military force against the Islamic State group and militant extremists in the Mideast. Until now, Obama has been relying on 9/11-era war powers.

Trade: Ask Congress for so-called fast-track trade promotion authority to allow an up-or-down vote on trade pacts. Obama wants to secure two major trade agreements—one with the EU, and one with Asia-Pacific nations.

Cybersecurity: Call for legislation enabling information-sharing between the private sector and US agencies like the Homeland Security Department. Companies would qualify for targeted liability protection if they comply with certain privacy restrictions.

No going back: Threaten to veto congressional attempts to roll back Obama’s executive actions on climate change and immigration and existing laws on healthcare and financial reform. AP

TAGS: Barack Obama, highlights of speech, Politics, State of the Union address, US