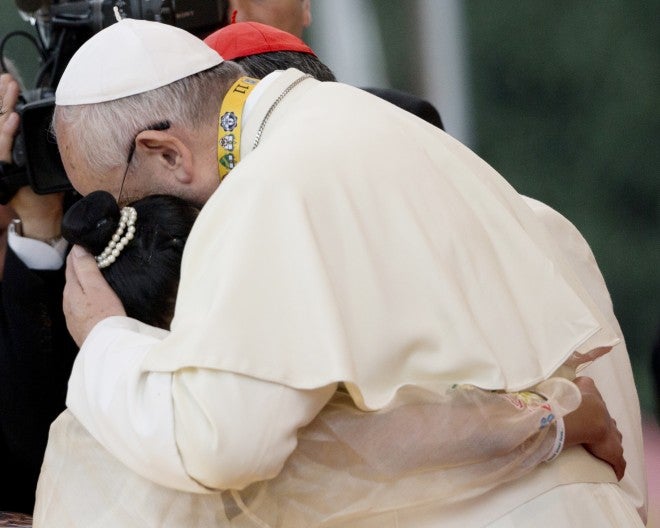 MANILA, Philippines—It was a child, 12-year-old Glyzelle Iris Palomar, who moved Pope Francis to discard his prepared statement at the “Encounter with the Youth” at University of Santo Tomas (UST) in Manila Sunday morning.

Cutting short Palomar’s testimony when, overcome with emotion, she burst into tears after asking him why God allows children to suffer, the Pope said, “There is no answer.”

Palomar had asked the Pope: “Many children are abandoned by their parents. Many of them became victims and bad things have happened to them, like drug addiction and prostitution. Why does God allow this to happen, even if the children are not at fault? Why is it that only a few people help them?”

Palomar, one of four children who shared their experiences from life in the streets of Manila, broke down in tears and could not finish her prepared statement for the Pope.

Francis had no answer to her question. But he enfolded her in his arm, discarded his prepared speech in English as he reverted to his native Spanish to deliver an impromptu and heartfelt response.

“She is the only one who has put a question for which there is no answer and she wasn’t even able to express it in words but in tears,” Francis told the estimated 30,000 rain-soaked young people on the UST grounds.

“Certain realities in life we only see through eyes that are cleansed with tears. I invite each one here to ask yourselves, have I learned how to weep, to cry?” the Pope said.

“If you don’t learn how to cry, you cannot be a good Christian,” he said.

The Pope also embraced 14-year-old Jun Chura, another former street kid who spoke about the plight of abandoned children.

The children came from the Church-run shelter Tulay ng Kabataan Foundation, which rescued them from the streets where they once lived by begging and scavenging dumps for scraps of thrown-away food.

Turning to the crowd of young people, the Pontiff exhorted them to “passionately and honestly” join efforts to help build a better world and express the Church’s love and hope for them.

Eufracia Osorio, 73, has trouble walking, but she joined the thousands of people who held a vigil outside the university gates, braving the cold and the rain to get a glimpse of the Pope.

Leaning on a walker, Osorio, together with her family, waited near the gate to the university on España Boulevard but learned later that they could no longer be accommodated inside.

“I was here as early as 4 a.m. and my grandchild has been waiting since last night,” she said.

Still, she waited for the Pope under a tree in the rain, praying the rosary.

Earlier, policemen tried to close the stretch of España overlooking the university’s Arch of the Centuries, where the Pope met briefly with the Philippines religious leaders. But they failed to contain the thick crowd that insisted on staying to see the Pope.

“We stayed because it’s good luck to see the Pope,” said Maricris Suico, who brought her little daughter Phoebe who had been asking for days to see the Pope.

The questions the youth representatives raised centered on the ordeals faced by children, the distractions from new technology and an unlimited source of information, and how to cope with success while still being merciful and compassionate.

The Pope said the world lacked the capacity to cry. Many do not understand the situations that those in the margins of society face, he said.

“Be courageous, please don’t be frightened of crying,” he said.

He also spoke out against a “worldly compassion,” saying it was “useless” when it only prompted one to reach into one’s pocket to give something to the poor.

“If Christ had had that kind of compassion, he would have walked by, just greeted three people, giving them something and moved on. But it’s only when Christ cried and was able to cry that he understood our lives,” he said.

The Pope also addressed a generation growing up in an age overloaded with information and different means of communication, addressing a request for guidance from law student Leandro Santos II on how to keep values intact in this day and how to love truly.

All these advances are not necessarily bad, the Pope said, but the youth must not become “young museums” or mere repositories of information, not knowing what to do with them.

The Gospel offers a way forward in letting information bear fruit, which is to use the language of the mind, of the heart, and of the hand in harmony, he said.

“What you think you must feel and put into effect,” he said. “To think, to feel, and to do.”

The Pope also said the most important subject the youth must learn is how to love.

“This is the great challenge life offers you, to learn how to love. Not just acquiring information without knowing what to do with it, but through that love let that information bear fruit,” he said.

Real love, he said, is about “loving and letting yourself be loved,” though allowing oneself to be loved does not come easy.

“That is why it is so difficult to come to the perfect love of God. We can love Him but we must let ourselves be loved by Him. Real love is being open to the love that comes to you. The love that surprises us. If you only have information you are not surprised,” he said.

He called on the young people not to have a “computer psychology” that makes them think they know everything.

“All answers on computers, but no surprises. The challenge of love. God reveals himself through surprises,” he added.

Surprises, he said, may shake up our world, but they move us in the right direction, he said.

“Allow yourselves to be surprised by God. Don’t be afraid of surprises. They shake the ground beneath our feet and make us insecure, but they move us forward in the right direction,” the Pontiff said.

Learn to be a beggar

He said it was important for young people to learn to be beggars.

He made the statements in response to questions from Rikki Macolor, who invented a solar night light for victims of Supertyphoon “Yolanda” (international name: Haiyan). Among his questions was how to be successful without being blinded by petty pursuits, and how to be agents of mercy and compassion.

Helping others is commendable, but one must learn to receive from others as well, the Pope said. Who may have much could be enriched from this experience, he added.

“This isn’t easy to understand: To learn how to beg. To learn how to receive with humility. To learn to be evangelized by the poor, those that we help, those who are infirm, orphans, they have so much to offer us,” he said.

“And this is what helps you mature in your commitment to give to others, to learn how to offer out your hand, from your very own poverty,” he said.

Remembering the prepared speech that he had discarded, the Pope said: “Sorry, I haven’t read what I prepared for you, but I’m consoled. Reality is superior to ideas. And the reality that you all have is superior to the paper in front of me.”

But Francis mentioned some of the points he had wanted to make, such as the challenge of integrity, concern for the poor, and of caring for the environment.

He said that the Philippines more than any other country is likely to be seriously affected by climate change.

Before the start of the liturgical program, the Pope went on a lengthy ride around the university campus despite the rain. His white, open popemobile passed through several precleared pathways around the football field, enabling a greater number of participants to see him up close.

Of course, they whipped out their camera phones and snapped away.