AirAsia fuselage to be lifted to surface after divers foiled 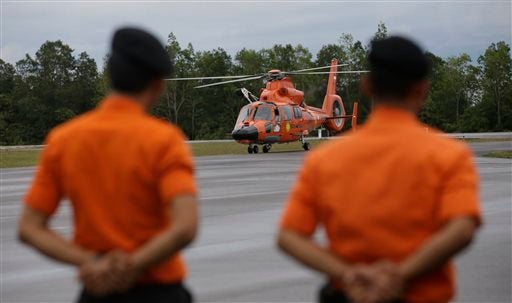 Members of the National Search And Rescue Agency (BASARNAS) watch a helicopter after a search operation of AirAsia Flight 8501 at the airport in Pangkalan Bun, Indonesia, Friday, Jan. 16, 2015. Bad weather and poor underwater visibility have prevented Indonesian navy divers from searching inside the large chuck of AirAsia jet wreckage that’s believed to be the fuselage. AP

PANGKALAN BUN, Indonesia — An Indonesian search official said Friday that the crashed AirAsia jet’s fuselage will be lifted to the surface after sea conditions again prevented divers from examining the large chunk of wreckage.

“Apart from the fuselage, we found what we suspected as the aircraft’s cockpit and also an engine,” he said. “We also found what seems to be a passenger seat in which we thought there still bodies tied on it.”

He did not specify whether or not the seat was inside the fuselage section that sits on the seabed at a depth of 28 meters (92 feet). The 30-meter-long (100-foot-long) part of the plane body with a wing attached was sighted Wednesday.

Rescuers believe that many of the bodies are still inside the main fuselage.

Soelistyo said the failure of the underwater examination of the wreckage left no option but to lift the fuselage, either by using floating balloons as the tail part was lifted early this week, or using cranes from tugboats. He did not say when the operation would start.

He added that one victim’s body was recovered on Friday, raising the total to 51. The plane had 162 people on board when it disappeared Dec. 28 en route from Surabaya, Indonesia, to Singapore.

Bad weather is a suspected factor in the crash. The plane’s flight data and cockpit flight recorders were retrieved earlier this week and will be key to learning the cause.

Earlier Friday, chief of operation of the agency, Suryadi Bambang Supriyadi said the wreckage that appears to be the cockpit was located by sonar imagery about 500 meters (yards) from the fuselage and partly embedded in the mud.